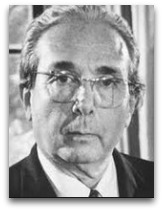 In existographies, Leó Szilárd (1889-1964) (CR:65) was a Hungarian-born American physicist noted for his 1922 article “On the Decrease in Entropy in a Thermodynamic System by the Intervention of Intelligent Beings”, one of the first publications to espouse on the relationship between Maxwell’s demon and information, and for conceiving, in 1933, of the nuclear chain reaction, a process releases several million times more energy than ordinary chemical reactions. [1] Szilárd is associated with the Berlin school of thermodynamics.

Szilard's demon | Chronology
Szilard's Brownian motion based Maxwell's demon article “On the Decrease in Entropy in a Thermodynamic System by the Intervention of Intelligent Beings”, to note chronology, was written in 1922, accepted by the University of Berlin as his habilitation (habilitationsschrift), where thereupon he was appointed a private lecturer (privatdozent), and published in German in 1929 in the Zeitschrift fir Physik (Journal of Physics), then translated into English in 1964 by translators Anatol Rapoport and Mechthilde Knoller and published in Behavioral Science, then later found in reprinted with permission form in various books, thereafter. [3]

Information theory
Szilard was a personal friend of Hungarian chemical engineer John Neumann, in 1930, for example, they taught a theoretical physics seminar together with Erwin Schrodinger; and would seem that it was Szilard's influence through Neumann that reached Claude Shannon convincing him to call information by the name entropy. [2]

Education
In about 1919, Szilárd conducted engineering studies at Technische Hochschule (Institute of Technology) in Berlin-Charlottenburg, but soon changed to physics taking classes from Albert Einstein, Max Planck, and Max von Laue. His dissertation on thermodynamics Über die thermodynamischen Schwankungserscheinungen (On The Manifestation of Thermodynamic Fluctuations) in 1922 was praised by Einstein and awarded the highest honor. In 1923 he received the doctorate in physics from the Humboldt University of Berlin. He was appointed as assistant to von Laue at the University of Berlin's Institute for Theoretical Physics in 1924. In 1927 he finished his habilitation and became a Privatdozent (instructor) in Physics at University of Berlin.