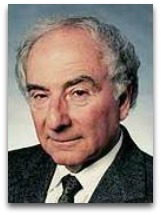 In existographies, Leon Cooper (1930-) is an American physicist (Ѻ) and neuroscientist noted for

Overview
In 2014, Cooper, in his Science and Human Experience, cites Goethe’s Faust, the character Mephistopheles – aka the “cultivated, witty, and cynical exponent of materialism and nihilism, and preaches a sophisticated doctrine of philosophical negation; the outstanding skeptic, with the inability to believe in anything; who represents evil, but, ironically, can also be an unconscious force for good” (Ѻ) in respect to the modern age – the 1802 Napoleon-Laplace anecdote, and attempts to riddle out what science, from an implicit atheism point of view, has to say about human experience, particularly what the new theories in neuroscience have to say about this. [1]

Other
Coooer, of note, is the person behind the fictional genius (see: greatest fictional geniuses ever) character Sheldon Cooper (Ѻ) [compare: Hari Seldon of Isaac Asimov's psychohistory], of 2007-launched The Big Bang Theory (Ѻ), with a claimed IQ of 187, described as a “BS, MS, MA, PhD, ScD, Caltech theoretical physicist, who started college at 11 and finished his PhD at 18”, in his Science and the Human Experience.

Religion | Beliefs
Cooper, who, in his "Science and Human Experience" (1976), cites Albert Camus, evidences that he is a Sisyphean atheist (see: Camus model) in purview and outlook.

Quotes | Employed
The following are quotes employed by Cooper:

“There are many phenomena that we do not yet understand. But it is reasonable to predict that man will eventually understand all of nature scientifically.”

“Asked to nominate a worthy successor to Victor Frankenstein's macabre brainchild, what should we choose from our contemporary inventory of terrors? The bomb? The cyborg? The genetically synthesized android? The behavioral brain washer? The despot computer? Modern science provides us with a surfeit of monsters, does it not? I have another monster in mind that troubles me as much as all the others – one who is nobody’s child but the scientist’s own and whose taming is no political task. I mean an invisible demon who works by subtle poison, not upon the flesh and bone, but upon the spirit. I refer to the monster of meaninglessness. The psychic malaise. The existential void where modern man searches in vain for his soul. Further, it is science which has made our universe an unbound theater of the absurd.”

Quotes | By
The following are quotes by Cooper:

“Will the Laplace of 1984 tell us with a sneer that he did not need that hypothesis?”

“When it comes to ‘feeling’, academia generally becomes uneasy (compare: Stewart-Weaver fallout). I recall a meeting concerning educational policy attended by representatives of the humanities and sciences. It was a scientist who suggested that in the humanities a student’s ‘emotions’ might be engaged – an intriguing, if unintentional revelation of his state of mind. The response of the humanities representatives was equally instructive. He quite violently took issue. The humanities, he insisted, are not a domain where emotion and feeling are predominant. They are scholarly, analytical, and emotionless as is science. Quite right. Where then is emotion in our systems.”

“It might turn out, in spite of the popular opposition between the ‘cold logic of science’ and the ‘warm spontaneity of art’, that science may yet provide us with a concrete realization of a human being as unique and individual as any ever heralded in poetry or song.”

“A consequence for the twentieth century is a society perhaps characterized as a ‘theater of the absurd’, not in the cosmic sense, but on a very individual level: a society in which there is no general faith to guide action, in which the individual is often so separate from the important social consequences of his actions that individual social action seems meaningless, a society which seems plagued by what might be characterized a as generalized problem of the commons.”

“Has the level of college education in this country dropped so low that not only mathematics, but any serious and disciplined intellectual approach is no longer acceptable?”

“As for reductionism, I have always been somewhat mystified as to what the fuss is about.”

“Faust knew everything that could be known as was not content.”

“The good materialist fervently believes that everything in our world, from vacuum polarization contributions to the electron’s magnetic moment, to chemical reactions, mental states, and social behavior, can be constructed from such objects as protons, electrons, quarks, strings, or branes: objects that obey those few remarkably concise rules known as the ‘laws of physics’. Why then don’t these ‘laws’ explain everything? We might as well as why they don’t explain Hamlet.”

“We need the leap of imagination that will show us how to construct feeling entities from non-feeling atoms.”

“Whether we like it or not, we’ll very likely find that what we call ‘soul’ is some configuration of material objects. I’m not saying I particularly like it or dislike it, but we might as well face the fact that it is probably that way.”

“Thinking, according to Pierce, is an activity that begins when the mind is uncomfortable and ceases when it is comfortable again.”

“It is the mark of a mathematician, as Bertrand Russell once said, that he does not know what he is talking about.”