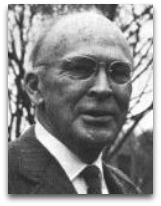 In existographies, Leslie White (1900-1975) (CR:34) was an American anthropologist, described as a "cultural determinist" (Herrick, 1956), noted, in anthropological thermodynamics, for being the first to introduce the laws of thermodynamics into the study of anthropology or cultures. [1] White is known, to some, as known as “anthropology’s most significant prophet of the second law”.

Determinism | Cultural
In 1948, White, in his “Man’s Control Over Civilization: an Anthropocentric Illusion”, stated the following, which Judson Herrick (1956) classifies as cultural determinism: [11]

“Man is wholly at the mercy of external forces, astronomic and geologic. Human beings are merely the instruments through which cultures express themselves.”

This “external forces” model, to note, is similar to the views of Einstein and his 1936 mysterious tune quote.

Overview
In 1943, White, in his “Energy and the Evolution of Culture”, opened to the following grand logic: [9]

“Everything—the cosmos, man, culture, may be described by matter and energy. The second law of thermodynamics tells us that the cosmos as a whole is breaking down structurally and running down dynamically; matter is becoming less organized and energy more uniformly diffused. But in a tiny sector of the cosmos, namely in living material systems, the direction of the cosmic process is reversed: Life becomes a building up process that must draw upon free energy in non-living systems, capture it, and put it to work in the maintenance of vital process. All life is a struggle for free energy. Biological evolution is a movement toward greater organization, greater differentiation of structure, increased specialization of function, higher levels of integration, and greater degrees of energy concentration.”

Curiously, in at this point in his writings he used the word thermodynamics three times discusses the second law, and free energy, but does not use the more elusive word entropy.

In 1959, White, in his The Evolution of Culture, employed the word thermodynamics thirteen times, defining culture as a “thermodynamic system”, and includes a chapter on “Energy and Tools”, referencing people such as Wilhelm Ostwald and Alfred Lotka, as well as concepts such as negative entropy, even using formulas. In short, here he attempted to create a theory explaining the entire history of humanity, where he outlined a theory that the measurement of energy consumption of a society is an indication of a society’s advancement.

White states, for instance, that one may think of the cultural process as being described the formula:

where E is energy and T is tool or technology that is producing P a quantity of human goods and services. In other cases, he gives the formulas:

where H and N are the human and nonhuman components of the energy factor; or even:

White's law
He is known for White’s law, which states that: [3]

“Culture evolves as the amount of energy harnessed per capita per year is increased, or as the efficiency of the instrumental means of putting the energy to work is increased.”

In a modern sense, this law of White might be interpreted or translated as a statement of the conversion of photonic energy, stemming from the sun, into induced movement geospheric surface growth and evolution, as quantified by the combined law of thermodynamics, in terms of the mechanical equivalent of heat. [4]

Cultural systems
The following are notable quotes by white on his views of the cultural system, from his 1969 work: [7]

“The primary function of culture is to harness and control energy so that it may be put in man’s service. Culture thus confronts us as an elaborate thermodynamic mechanical system.”

“Cultural systems, like all material systems, are thermodynamic systems. Their existence and operation require energy. Every cultural event involves the expenditure of energy.”

Influenced
A noted student of White was Richard Adams.

“Human behavior is determined, therefore, but culture. But culture is not determined by man, by his wishes, wills, hopes, fears, etc. Everything in the cosmos can be interpreted in terms of matter and energy, whether it be a star, atom, cell, or man.”

“In living systems, the direction of the cosmic process is reversed. It runs counter to the cosmic current.”

“No ape can appreciate the difference between holy water and distilled water, because there is none, chemically speaking.”

— Leslie White (c.1950), oft-repeated dictum spoken to students at the University of Michigan; oft-referenced by his student Marshall Sahlins (2008) (Ѻ)