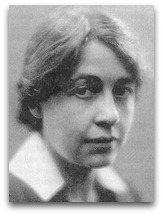 In genius studies, Leta Hollingworth (1886-1939) was an American psychologist noted for her work on the education of exceptional children. Hollingworth, supposedly, set the genius mark at IQ of 160 or above.

Children with IQs above 180
In 1916, Hollingworth witnessed a child score 187 on one of the Binet-stylized intelligence tests; this prompted her to seek out eleven other children with similar capabilities. The next twenty-three-years The twenty three years were spent finding the children and attempting an in-depth study. Fully aware that she would never react long enough to see all of the children into their adulthood, Hollingworth meticulously attempted to build a framework upon which future research findings could be accomplished. Hollingworth's final study on gifted children was published after her dereaction (death), by her husband in 1942. [1]

She found that individuals who test above 180 IQ are characterized as having a strong desire for personal privacy, rarely provide personal information, are afraid of the potential consequences of being labeled "special", and do not like attention being called to them or their families. Hollingworth was able to work past all of these concerns and conducted research that benefited science while maintaining participant privacy at the same time. She laid the foundations for future studies of gifted children with this work. The results of the study suggested that many exceptionally gifted children suffer adjustment problems due to two factors: inept treatment by adults and lack of intellectual challenge.

Quotes | Employed
The following are quotes employed by Hollingworth:

“Genius—a very superior mental ability, especially a superior power of invention or origination of any kind, or of execution of some special form, such as music, painting, or mathematics. It has no special technical meaning, but has occasionally been defined as equivalent to an intelligence quotient (IQ) of 140 or above.”

Quotes | By
The following are quotes by Hollingworth:

“Children of 140 IQ waste half their time. Those above 170 IQ waste practically all their time in ordinary elementary school.”