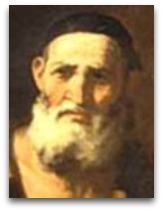 Education
Leucippus either never existed, as Epicurus and Hermarchus, supposedly profess (Laertius, 230), or he was the pupil of Zeno of Elea (Pseudo Galen, c.1500), or the pupil of Melissus (Tzetzes, c.1170), and or he was a member of the school of Pythagoras (Iamblichus, c.305). [4]

Influence
Leucippus’ student was Democritus, who in turn mentored Epicurus, whose 300 scrolls were amassed by Lucretius, aka the "posthumous mouth-piece of Epicurus" (Schrodinger, 1949), and presented in the form of the c.60BC poetic book On the Nature of Things.

Quotes | On
The following are quoted on Leucippus:

“Apollodorus in his Chronology tells us that Epicurus was a pupil of Nausiphanes and Praxiphanes; but in his letter to Eurylochus, Epicurus himself denies it and says that he was self-taught. Both Epicurus and Hermarchus deny the very existence [?] of Leucippus the philosopher, though by some and by Apollodorus the Epicurean he is said to have been the teacher of Democritus. Demetrius the Magnesian affirms that Epicurus also attended the lectures of Xenocrates.”

“A pupil of Zeno’s was Leucippus, the first proponent of the theory of atoms. Democritus got the theory from him and developed if further.”

“From the earliest beginnings of physical science, we meet with the firm conviction that everything that happens is governed by inviolable laws, so that the course of events forms an inevitable and unalterable infinite sequence of causes and effects. The first atomic physicist was Leucippus, a contemporary of Socrates in the fifth century BC. Of Leucippus, only two sayings are preserved: one that he refused to believe that the sun, moon, and the stars are living beings; the other that nothing comes to pass without a cause, but everything happens by reason and of necessity. This he maintained in the fifth century BC. And toward the end of the nineteenth century AD, physicists were fully prepared to endorse his opinion.”

Quote | Determinism
The following are the various English renditions of the determinism fragment of Leucippus:

“Nothing happens in vain, but everything from reason and by necessity.”

“Nothing comes to pass without a cause, but everything happens by reason and of necessity.”

“Nothing occurs at random, but everything for a reason and by necessity.”

“Nothing happens without a cause, but with a cause and by necessity.”

The key variously translated term here is “ματην” (Ѻ), in the “Nothing happens [“ματην”]” segment, which has been translated as: “at random”, “causelessly”, or “in vain”.

Quotes | Other | By
The following are the other two extant quotes attributed to Leucippus:

“I refuse to believe that the sun, moon, and stars are living beings.”

“Atoms are always in motion in space [void].”