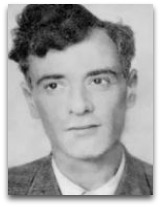 In existographies, Lev Landau (1908-1968) (IQ:170|#340) (CR:25) was a Russian physicist noted, in thermodynamics, for his low-temperature work and for free energy calculation theory; noted, in physics, for his multi-volume Course of Theoretical Physics (Ѻ), much of which was composed in his head while in an NKVD prison in 1938-1939, later written with the co-authorship assistance of his student Evgeny Lifśhitz, which some consider to the the “bible of physics” (see: scientific bibles); known popularly for his so-called Landau genius scale, a personal logarithmic ranking of physics geniuses that he kept in his pocket, changing from time to time.

Free energy
American physicist John Kirkwood, a protégé of Arthur Noyes, is said to have laid the foundations for the standard method for estimating free energy differences, using perturbation theory and thermodynamic integration, by building on the chemical affinity and extent of reaction work of Theophile De Donder. Landau, along with Benjamin Widom and Robert Zwanzig, are said to have further this approach. [1]

Landau is noted for his personal physicist ranking system, which he kept on him, using a logarithmic 0 to 5 point scale (Lifsĥitz, 1974) (Pitaevskii, 2010) to rank the great physicists. (Ѻ) In 1974, Landau's close associate Russian Evgeny Lifsĥitz, in a talk at the Abdus Salam International Centre for Theoretical Physics (ICTP) in Trieste, Italy, mentioned Landau's genius scale; an account of which is given by Indian physicist Asoke Mitra (2006) as follows: [5]

“Landau’s classification of outstanding genius physicist, as narrated by his close associate Evgen Lifsĥitz, at a talk given in 1974 at the Abdus Salam International Centre for Theoretical Physics (ICTP) in Trieste, Italy. According to Landau’s classification, Isaac Newton received the highest rank, 0, followed by Albert Einstein at a rank of 0.5, then by Niels Bohr, Werner Heisenberg, Erwin Schrodinger, Paul Dirac, Satyendra Bose, Eugene Wigner, and a few others at 1, and so on. Landau had given himself a modest rank of 2.5. The classification continued to the rank of 5 for mundane physicists.”

In table form, Landau's rankings are as follows:

“Landau was always walking around with a ranking of the best physicists in history recorded in his notebook. He scored them on a logarithmic scale of 0 to 5. Newton was rated the best. Einstein was next and, of course, Bohr. After them came Heisenberg, Dirac, Schrödinger, Bose and Wigner.”

Landau, according to both of these accounts, ranks Newton first. Pitaevskii, to note, seems to places Dirac at 5th place and Schrodinger at 6th, contrary to Lifsĥitz who puts Schrodinger at 5th and Dirac at 6th.

Greatest physicist rankings
In the 1960s, Landau was considered (Ѻ) and semi-cited (Ѻ) as “Russia’s greatest physicist”. In 1981, American physicist David Mermin published a book review article entitled “One of the Great Physicists … and Great Characters” on Landau. [4] Recent postings consider Landau to be among the greatest physicist ever candidate grouping classification. (Ѻ)

Education
Landau was said to have been a child prodigy, producing a brilliant paper on quantum mechanics at the age of nineteen. [1] Landau was a protege of Niels Bohr. He is the eponym, in schools classifications, of the “Landau school”, a low-temperature research department at Kharkov, Russia, focused on explaining the properties of Helium II using thermodynamics and quantum mechanics.

Students
A noted student of Landau, in Kharkov, was Hungarian-born physicist Laszlo Tisza, who did post-graduate work with Landau and was said have been much impressed with Landau’s integration of thermodynamics into modern physics.