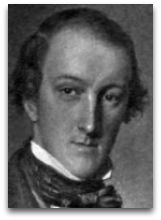 In science, Lewis Gordon (1815-1876) was a Scottish civil engineering notable for introducing the term “mechanical effect” into the science of steam engines and particularly for his influence on young Scottish brothers engineer James Thomson and physicist William Thomson and their interest in a general theory of heat and heat engines.

Education
Gordon born in Edinburgh, Scotland, and his first university was Edinburgh University, where he was a student of Scottish physicist James Forbes. [4] This associates Gordon with the Edinburgh school of thermodynamics. Gordon also spent time studying abroad at the School of Mines at Freiberg in Saxon and the Ecole Polytechnique, the original French school of thermodynamics; an educational path a result of which he became an engineer. Gordon was involved with the construction of the Thames Tunnel, from 1837 to 1839. In 1840, he set up a civil engineer partnership with Lawrence Hill in Glasgow. From 1841 to 1855, Gordon was the first holder of the chair of civil engineering and mechanics at Glasgow University. In 1855, supposedly frustrated with the lack of facilities at Glasgow, he handed over his position to William Rankine and moved on to a private practice involved with the designing iron bridges. He also went on to be involved with wire rope, submarine cables, railway engineering, and telegraphy engineering. [3]

During the 1841-42 school year, a 19-year old James Thomson (the older brother) went to Glasgow College and was able to study engineering under Gordon, a newly appointed professor of civil engineering and mechanics (1840-45). [2] During his mentoring of James, in some way or another, it seems that Gordon's French education at the Ecole Polytechnique, the school of Sadi Carnot, author of Reflections on the Motive Power of Fire (1824) and Emile Clapeyron, author of Memoir on the Motive Power of Fire (1834), the first two papers on thermodynamics, seems to have rubbed off on James, being that a discussion with his younger brother William on the early two French pioneers of heat engine theory (Carnot and Clapeyron)

In a letter to William in August, 1844, James inquired who it was that had proved there was a definite quantity of mechanical effect (work) given out during the passage of heat from one body to another. He stated his intentions of writing an article for the Artisan about the theoretical possibility of working steam engines without fuel by using over again the heat which was thrown out in the hot water from the condenser, noting that:

“I shall have to enter on the subject of the paper you mentioned to me.”

This paper, according to historian British energy historian Crosbie Smith, was almost certainly the 1837 translation for Taylor’s Scientific Memoirs of Clapeyron’s “Memoirs on the Motive Power of Heat”. [3] The discussions in James letter of 1844, according to Smith, are the earliest record of implicit references to Clapeyron and Carnot by the Thomsons.

In 1848, Gordon famously gave William Thomson (the younger brother) a copy of French physicist Sadi Carnot’s 1824 memoir Reflections on the Motive Power of Fire. [1] It was after reading this memoir, which William had previously spent years searching for (particularly in the bookstores of Paris), that William essentially launched the science of thermodynamics, when he published his 1848 “On an Absolute Thermometric Scale founded on Carnot’s Theory of the Motive Power of Heat, and Calculated from Regnault’s Observations” and 1849 “An Account of Carnot’s Theory of the Motive Power of Heat; with Numerical Results Deduced from Regnault’s Experiments on Steam”, the latter of which found its way into the hand of German physicist Rudolf Clausius who in turn was so intrigued with this new subject that he "founded", in the retrospect words of American engineer Willard Gibbs, the science of thermodynamics with the publication of his most-famous memoir the 1850 "On the Moving Force of Heat and the Laws of Heat which may be Deduced Therefrom".