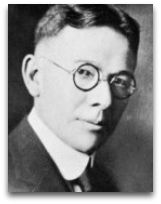 In genius studies, Lewis Terman (1877-1956) was an American psychologist noted for his 1916 invention of the concept of the intelligent quotient "IQ" and the "IQ scale", a 1-200 point numerical scale: 20 being idiot, 100 being average intelligence, 140 being genius level, and 200 being ceiling genius range for intelligence ranking, testing, and classifications methodology.

In 1917, Terman used his formula to calculate or rather miscalculate (see: IQ miscalculation) an IQ of 200 for Francis Galton. [2]

Quotes | By
The following are quotes by Terman:

“How to find the IQ of adult subjects. Native intelligence, in so far as it can be measured by tests now available, appears to improve but little after the age of 15 or 16 years. It follows that in calculating the IQ of an adult subject, it will be necessary to disregard the years he has lived beyond the point where intelligence attains its final development. Although the location of this point is not exactly known, it will be sufficiently accurate for our purpose to assume its location at 16 years. Accordingly, any person over 16 years of age, however old, is for purposes of calculating IQ considered to be just 16 years old. If a youth of 18 and a man of 60 years both have a mental age of 12 years, the IQ in each case is 12 + 16, or .75. The significance of various values of the IQ is set forth elsewhere. Here it need only be repeated that 100 IQ means exactly average intelligence; that nearly all who are below 70 or 75 IQ are feeble-minded; and that the child of 125 IQ is about as much above the average as the highgrade feeble-minded individual is below the average. For ordinary purposes all who fall between 95 and 105 IQ may be considered as average in intelligence.”

“There is nothing about an individual as important as his IQ, except his morals.”

References
1. Terman, Lewis. (1916). The Measurement of Intelligence: an Explanation of and a Complete Guide for he Use of the Stanford Guide for the Use of the Stanford Revision and Extension of the Binet-Simon Intelligence Scale (I.Q., pg. 53, etc.). Houghton Mifflin Co.
2. Terman, Lewis. (1917). “The Intelligence Quotient of Francis Galton in Childhood,” American Journal of Psychology, 28: 209-15.
3. Castles, Elaine E. (2012). Inventing intelligence: How American Came to Worship IQ (pg. 3). ABC Clio.