The floating smaller negative (-) charges (polarities) and hovering larger positive (+) charges (polarities), will be used as representative models of electrons (-) and protons (+) to show how atom structure and how molecules, i.e. geometrical structures of atoms, form from atomic interactions.

Patterns
The following are some of the geometrical patters:

Here we can discern the underlying nature of phenomena such as wars and revolutions, namely that in patterns 7, 10, 12, 16, and 20 there is a cohesive stability pattern, i.e. social peace, one might say, speaking anthropomorphically, and the jump from each involves less stable middle arrangement transition states, e.g. patterns 8 (shown) and 9, both less geometrically cohesive, in going from 7 to 10, both more geometrically cohesive, the dynamics of which can be seen in the video. Scaled up to the human social level, the daily input of photos insures that proton-electron configuration geometries grow, i.e. societies increase, according to which jumps to new stability patterns will be inevitable.

This demonstration will be accompanied by a demonstration, via thermometer (measurement), endothermic reaction (heat-absorbing), specifically the baking soda (NaHCO3) and vinegar (CH3COOH) reaction and an exothermic reaction (heat-releasing), specifically the baking soda solution (NaHCO3) and calcium chloride (CaCl2) reaction, as models to explain the difference between hot and cold reactions between people, or technically endergonic reactions (work-absorbing) and exergonic (work-releasing) reactions between people, defined as powered chemicals, as typified by the phrase: “It’s NOT working between us any more, I’m sick of you” (endergonic) or “Are relationship WORKS great—we love each other!” (exergonic). [1]

These three basic demonstrations will then be used to answer the typical questions that children have as they grow, using specifically American socio-political philosopher Jeremy Rifkin's 2010 “Big Questions” of children model (see: video (0:10-5:00) + belief system (children)) and the Pakistani-born British philosopher-journalist and TED curator Chris Anderson's 2012 “Questions No One Knows the Answers To” model (see: video (0:00-3:45). [2]

Images
The following are a few video stills from the lecture. The following (48:45) shows Thims taking the final state temperature of the exothermic chemical reaction (baking soda + vinegar), in front of The Egyptian Book of the Dead (1550BC), the Bible (150AD), and On the Equilibrium of Heterogeneous Substances (1876) by Willard Gibbs, the three big paradigm changing books of human understandings of nature: 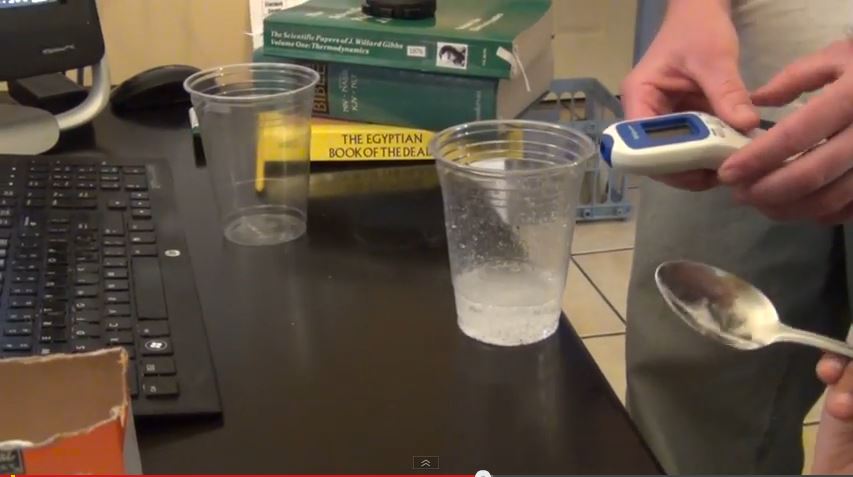 The following (25:30) shows Thims explaining what reactants and products are in the context of the fundamental forces of nature, gravitational force, electromagnetic force, and strong nuclear force: 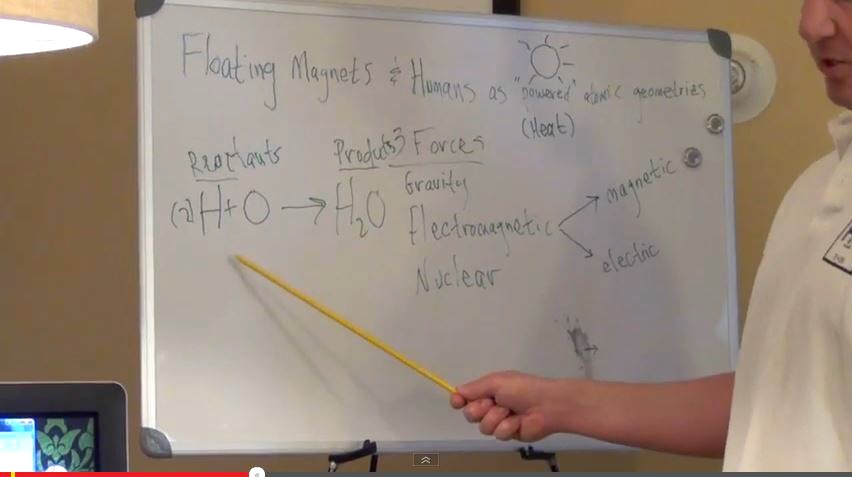 References
1. (a) Energy Changes in Chemical Reactions – MiddleSchoolChemistry.com (a K-8 themed ACS.org site).
(b) See: Thims’ Apr 2013 lecture (section: human chemical reaction theory) for more on this.
2. (a) Rifkin, Jeremy. (2009). The Empathic Civilization: the Race to Global Consciousness in a World of Crisis. Polity Press.
(b) Chris Anderson (entrepreneur) – Wikipedia.