In anagrams, Libb Thims, e.g. see ‘Thims’ in Namespedia.com (Ѻ), is a reverse anagram of the generic name Bill Smith → Libb Thims (Bill Smith, reversed; extra letter B and less one letter L), a generic John Doe type name, the name "Lib" meaning "book" or "word" in Latin; such as shown, in the following image, of a fixed star from chapter five (Cap. 5), Book I (Lib I), of Copernicus' On the Revolution of the Heavenly Orbs, namely from: [8] 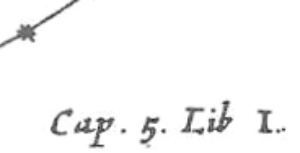 The name "Bill Smith" was used by Thims in circa 1995, as a renamed listing of his new home phone number, with with AT&T, which he changed from his birth name "Michael R.K.", as a method of delisting his phone number, so to cut off a girlfriend he was forced to break with.

The name "Bill Smith" was as a pre-publication pseudonym author, employed in 2002-2004, until it was found that, via Amazon, that there are many "Bill Smith" authors, Smith being the most common last name in American, William or Bill being a top ten male name; hence, in 2009, Libb Thims became his legal name, via court name change proceedings.

Overview
The name Bill Smith, may have had its origin in the assumed name "Bill Carson" from the 1966 film The Good, the Bad, and the Ugly (watched by Thims), which later originated as a joke name in circa 1996, being listed with the phone company (AT&T); was used as Thims’ prototype pen name in 2002; became an anagram (Libb Thims) in 2003-2004 (about the time of writing of chapter 23 of the three volume Human Thermodynamics manuscript), and Thims’ legal name, i.e. Libb Michael Thims, on November 12, 2009, processed through Cook County Courts, Chicago IL. [1]

Etymologically, during the formation of the anagram, in 2003-2004, the word game book Mad Libs (Libb) and the sewing thimble (Thims), pictured adjacent, both objects used in Thims' youth, most likely served as phonetic models, using the letters of the generic name Bill Smith; Smith being the most common last name in America, and William, wherein Bill is the shortened version, is a top five American male name. [2]

Origin
As to the origin of the generic name "Bill Smith", in circa 1995 Thims had recently moved into a three bedroom apartment, with a newly unknown address, with two friends, and while sitting in the start of one of his fall season chemical engineering classes, a decision occurred to end the relationship with his girlfriend at the time, an architect graduate student at the University of Michigan, whom Thims was close to marrying, and at the end of the class "spontaneously" went down the hall to the first floor main entrance to the Dow chemical engineering building (University of Michigan) to the nearest payphone, called AT&T and had the apartment phone changed to the public listing of “Bill Smith”, a generic name, similar to John Doe, that essentially came out of nowhere, effectively terminating the relationship in an unspoken manner. [3]

The name, Bill Smith, subsequently, is a person whose identity is unknown, like a modern day John Doe. [4]

Over the next year or so the name “Bill Smith” became something of a inside joke, being that when someone would call from the apartment, the name Bill Smith would come up on the recipient’s caller id, to which the recipient of the call would eventually ask: “Who is Bill Smith?”, where after the background story to the name would be explained.

Pseudonym
The name Bill Smith, six years later, subsequently, served as the prototype pseudonym of a short book by Thims, entitled The Third Question: the Explanation of a Species in 23 Chapters, themed on the topic of mate selection, love, and reproduction viewed as a chemical reaction. In origins, in December 2001, Thims sent out a one page query letter, using his birth name (M.R.K.), to Bantam-Dell Publishing Group on a proposal to write a short book, presenting the view that process of love (in which a child is reproduced) are components of a basic chemical reaction, according to which the spontaneity criterion of chemical thermodynamics applies, a book slated to be written similar in style to English science writer Matt Ridley’s 1999 book Genome: the Autobiography of a Species in 23 Chapters (specifically modeled on the 2000 raised cover Perennial edition, pictured adjacent).

In the months to follow the query letter submission, as the manuscript began to grow, the issue of anonymity in combination with the issue of aversion, in Thims’ mind, with public sight of his middle and surname name began to arise, whereby it was reasoned that during the writing process and once a book was published, that an author should be able to detach themselves, mentally and physically from the project, a logic used by many famous authors, such as Lewis Carroll (Charles Dodgson), Mark Twain (Samuel Clemens), Stephen King (Richard Bachman), etc. [5] The name Bill Smith logically came to mind. The name Bill Smith, subsequently, was used in the first draft cover the newly forming manuscript, as pictured.

Anagram
In 2003, as the manuscript and research for the book began to grow, it became apparent, particularly through Amazon and Google searches, that there were dozens of Bill Smith authors, and that a unique, different, or reformulated pen name would be needed so that the future searches, for the book or author, would have immediate recognition and top search engine rankings.

In this direction, after toying around with different anagrams for the name Bill Smith, the conclusion arrived at was to reverse the sequence of letters in the name, in the form: Llib Htims, but to modify the result so that the resultant name was phonetically common, wherein “Libb”, similar to the Latin ad lib (as you wish) or its derivative Mad Libs (a popular 1953 phrasal template word game) and “Thims”, similar to a thimble (the pitted cap worn on the finger to push a needle in sewing), were chosen as the final result. [6]

In retrospect, the names “Libb” and “Thims” were most likely arrived at by occurrence of past familiarity, in that Mad Libs was a game Thims’ played often when he was young and that sewing thimbles were used frequently by Thims’ mother (who died when he was young).

In 2004, subsequently, the pen name of Libb Thims was being printed on draft covers, such as to the working manuscript, retitled The 3rd Question: Energy, Matter, and the Human Molecule, a precursor to the Human Thermodynamics manuscript, both shown adjacent.

The name Libb Thims became permanent in the 2005, with the hand publishing of a 100-page manuscript entitled Cessation Thermodynamics, on the theoretical relationship between the process of death and the first law of thermodynamics, which were distributed to various people in the Unites States.

Legal name change
In 2006/2007, the use of the name Libb Thims for official purposes, e.g. copy writing, registered P.O. box, checks payable to Libb Thims, tax returns on revenue received through the works of Libb Thims, etc., made it apparent that a legal name change would be appropriate.

On November 12, 2009, Thims legally changed his name to Libb Michael Thims, through Cook County Courts of Chicago, Illinois, retaining his former first name (Libb Michael Thims), which was made his current middle name, for the sake of past acquaintances preferring to call him by that name. [7]

In publication, however, to facilitate name brand recognition and reader recognition, Thims tends to go by Libb Thims, only.

The name Libb Thims, since 2004, has been representative of the Thims’ work in human chemistry and human thermodynamics.

Lib → Libb | in retrospect
In 2012, Thims asked American painter J.G. to draw a surprise inking (temporary tattoo) on his forearm, during which time Thims closed his eyes and she drew by random choice the name Gibbs in a type of Chicago gangster font; when Thims first saw it, he first thought she had wrote "Libb", but then asked her where she got the idea from, after which she pointed to photo of American engineer Willard Gibbs on the wall of Thims study.

The next day, Thims came to the realization that possibly the name of Willard Gibbs was from where he had likely subconsciously drew upon the model to change "Lib" to "Libb" (similar to "Gibbs") in the finalized version of his anagrammed name; although, to note, this is only a retrospect summary of the situation.