In hmolscience, Libb Thims (experiments) refers to various demonstrated experiments, some historical some new, done by American electrochemical engineer Libb Thims in lecture for the sake of teaching, educational, and demonstration purposes in regards to explaining and understanding physicochemical humanities topics, in respect to foundational principles.

Overview
In 1796-1809, German polyintellect Johann Goethe began to pioneer the method of using chemical reactions to explain social phenomena (see below), as outlined in in more detail in his version of human chemical reaction theory.

In circa 2012, American electrochemical engineer Libb Thims began demonstrating experiments in lecture to help elucidate and explain to students how physical and chemical experiments underpin various social processes and phenomena.

Helicopter automaton | Death as anthropism
On 13 Jan 2015, Thims, in an Atheism Reviews episode (Ѻ), in attempts to explain the religio-mythology anthropism—in the Charles Sherrington sense of the matter—fictional nature basis of the concept of “death”, talked in front of a flying helicopter, so as to give presentation of a Cartesian automaton stylized model of two different types of “animated” movement: human (carbon-based animation) vs helicopter (silicon-based animation).

In 16 Apr 2014, Thims, during his “Floating Magnets Experiment and Humans as Powered Atomic Geometries” talk (Ѻ), did the famous Gilbert-Mayer “floating magnets experiment”, to explain how social geometries form; the mean girls model being one example: 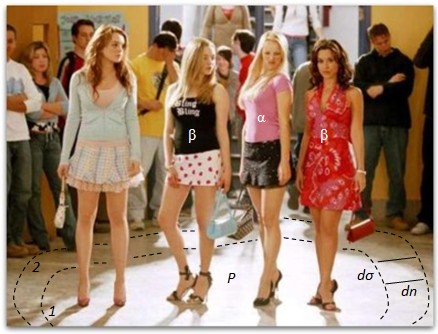 In 16 Apr 2014, Thims, during his “Floating Magnets Experiment and Humans as Powered Atomic Geometries” talk (Ѻ), did both exothermic and endothermic reaction, measuring initial and final temperatures, so to indicated the quantitative and visceral (hands on cup feeling) of hot and cold reactions, respectively, so to explain how such reactions exist between people as chemical reactants:

Pen lifting experiment | Principle of the transmission of work
On 29 Jun 2013, Thims, during his University of Pitesti, Romania, “Econoengineering and Economic Behavior” talk (Ѻ), did the experiment (a) take one step to the center of the room and experiment (b) lift your pen into the air, so to demonstrate the principle of transmission of work, namely that whenever a force moves an object through a distance work is done or in the words of Clausius “whenever a body moves under the influence of a force, work is performed.”

The bodies in question being: (a) people and (b) pens.

In 2013, Thims, during his “A Guidemap to Human Chemical Thermodynamics: Goethe's Elective Affinities to Human Free Energies” lecture, performed the famous ball and ring experiment to demonstrate the conception of daily cyclical entropy increase inside a social piston and cylinder volume. 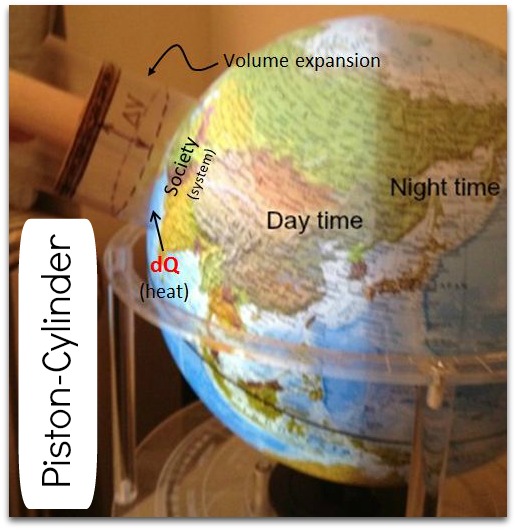 In 2012, Thims, during his “An Introduction to Human Thermodynamics: Chemistry, Physics, Engineering, and Applied” lecture, did a salt (NaOH) and water (H2O) reaction as compared to a sodium (Na) and water (H2O) to demonstrate the difference between explosive reactions (volume change) to those that are non-explosive (no volume change) so to visually demonstrate the so-called "power of the vacuum" as early thermodynamicists referred to the nature of work.

The following is salt (NaOH) and water (H2O) reaction, i.e. the chemical reaction (solvation reaction) for the contact of salt (NaCl) with water (H20):

The following is sodium (Na) and water (H2O) reaction, i.e. the chemical reaction for the contact of sodium (Na) with water (H20):

The above two reaction types, (a) former: weakly spontaneous (ΔG = -0.027 kJ/mol) and (b) latter: greatly spontaneous (ΔG = -182 kJ/mol), are thus small scale versions of the way reactions occur between humans, which technically are animated types of chemicals (human chemicals) or molecules (human molecules), and hence the above two differing reactions visually capture the gist of "human chemical thermodynamics" or chemical thermodynamics applied to the study of human existence in a social, economic, and historical sense.

In 1796, German polymath Johann Goethe, in his discussions with Friedrich Schiller, began to pioneer the method of using chemical reactions models as examples to help elucidate social phenomena. The following gives an outline of the logic of Goethe's 1908 human chemical theory, as explained via Platonic-Hegelian dialectic narration, in the second video, in which reaction between limestone, i.e. calcium carbonate (CaCO3), and sulfuric acid (H2SO4) which upon contact yields gypsum (CaSO4·2H2O), in the form an aqueous crystal, and carbon dioxide (CO2) gas, a reaction that is compared and contrasted with the reactions that are occurring between the main characters in the novel: Charlotte (carbon dioxide), Edward (lime), Captain (sulfuric acid); the modern chemical equation for the limestone sulfuric acid reaction is shown below; a video of reaction of calcium carbonate chips with sulfuric acid is shown to the right —which shows that in the course of 13-minutes, the “extent”, symbol ξ, pronounced xi or “zi”, starting from an initial 50 grams total of reactant remains, only 49.13 grams remain, measurable by the scale, meaning that 0.83 grams of carbon dioxide gas was produced as reaction product: