In lectures, Libb Thims (lectures) refers to public or university talks or lectures given on human thermodynamics, or the related subjects, including human physics, or human chemistry, by American electrochemical engineer Libb Thims.

Overview
The following is an early lecture suggestion for Thims, who had begun to write in 2001 on the chemical thermodynamics of human reactions and interactions:

“I think you should take a bunch of copies of your book, go down to a street corner, and just start talking.”

In 2005, Thims began to go public with his work, with the launch of HumanThermodynamics.com (2005), the HumanChemistry 101 YouTube channel (2007), followed by Hmolpedia (EoHT.info) (2008), and during this period began to offer to and to receive offers to lecture, give invited guest lectures, poster presentations, etc., to or at various classes, conferences, workshops, and or symposiums; some of which are listed below. Thims' first university lecture was in 2010, video recorded, but not polished enough for publication. Some of the web outlines of these lectures, per year, are listed below (as well as in the adjacent dropmenu), in reverse chronological order:

2016
The following is the "features speakers" section for BPE 2016, showing Thims, along with Victor Yakovenko, John Bryant, Bruce Boghosian, among others: 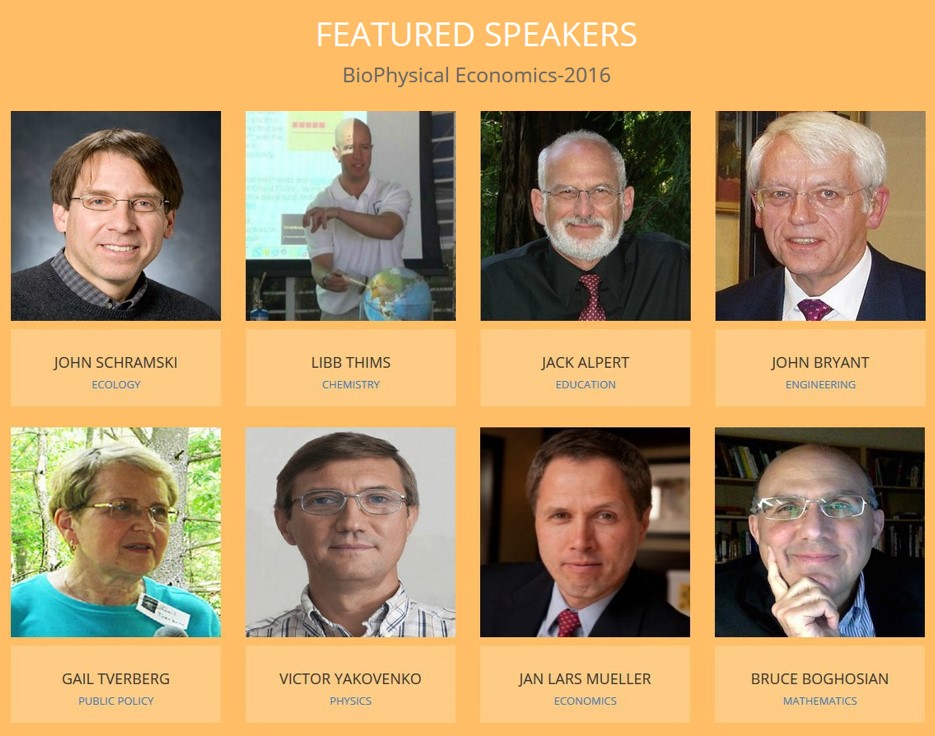 2015
In 2015, Thims gave a 14-part Aug lecture on "Zerotheism for Kids" to six kids to so to resolve a six year old's query "how did god create the world so fast" (i.e. in 7-days), after reading a standard children's bible, explained via Hypatia-framed "teach myths as myths" realism or extreme atheism point of view

2014
In 2014, Thims gave an Apr lecture to three kids on the floating magnets experiment.

Public lectures | 2003-2009
In circa 2003 to 2005, Thims had a little over a hundred people review different parts of his various working manuscripts, see: Libb Thims (publications), unfinished section, during which time one reviewer, American graphic designer Edward Duncan, commented: “I think you should take a bunch of copies of your book, go down to a street corner, and just start talking.”

In summer 2006, Thims met Russian physical chemist Georgi Gladyshev at the 14th annual International Anti-Aging Congress and Exposition in Chicago at the Rosemont Convention center, who was one of the key speakers and discussed Thims’ human thermodynamics in lecture. The 2007 A4M lecture at the 15th annual meeting, where Gladyshev also discusses Thims' theories, is available as an audio mp3. [2]

In 2007, Gladyshev invited Thims to give a talk to a large scientific conference at Moscow, Russia, which Gladyshev organizes yearly, with the condition that Thims' first complete his PhD.

In late summer 2008, following the publication of The Human Molecule, Thims took the advice of Duncan and began to go downtown to various street corners, such as the by the entrance to the Michigan Avenue Bridge, in front of the Wrigley field building, Chicago, and "just start talking" and try to educate people that they are in fact a molecule reactive to each other as are the smaller atoms, molecules, and chemicals of the periodic table. These early public lecture attempts were a learning experience, to say the least.

Thims' envisioned that a more honed group of listeners would be need, to understand and get the gist of what he was talking about, over that of the lay public, being that the subject is extremely mathematical and not a language often used by the common person.

In circa 2008, Thims perused the idea of bring human chemistry to the high school level and paid a visit to the science teachers of New Trier High School, Illinois, where a friend of his is principle, a school which, to note, in 2002, as discussed in Thims' 2007 Human Chemistry, assigned a project, entitled “It’s all about Bonding: How Humans, Animals, Chemicals, and Natural Forces, have Conflicted in Time, but Also Worked Together”, wherein students were asked to consider how elements and chemical species chemically bond or conflict, and to think about how these polar opposite processes of bonding and conflicting play out in life, specifically in human relationships, in the form of human chemical bonds. [1]