In science, lines of force or "lines of magnetic force" are force lines created in a magnetic field or around a permanent magnet; also defined as imaginary lines in a field that enable the direction and strength of the field to be visualized.

The lines of force concept is primarily used in electric and magnetic fields; in electric fields they are sometimes called "tubes of forces", to express their characteristic of being perpendicular to a conducting surface. [8]

History
In 1716, English astronomer physicist Edmond Halley diagrammed which he called "circulating effluvia", otherwise known as of magnetic field lines, found by placing a magnetic terrella (Ѻ) on a level surface, then scattering some fine iron filings around it, after which, given some some gentle tapping, the filings settle into patterns shown below: [5] 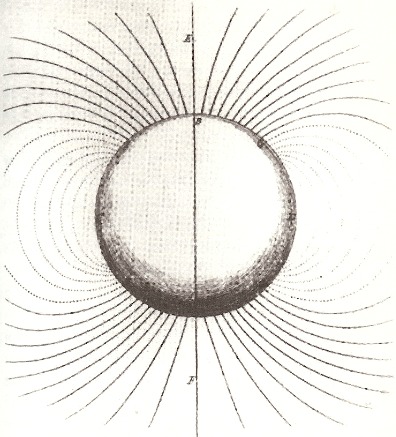 The following are similar depictions using a permanent magnet, iron filings and compasses:

In the 1830s, English chemical physicist Michael Faraday adopted Halley's circulating effluvia ideas into a "lines of force" theory. In 1852, Faraday published “On the physical character of the lines of magnetic force”, in which Faraday affirms the physical reality of lines of force, and their causal action, as distinct from a purely geometrical treatment of their distribution in space.

In 1856, Scottish mathematical physicist James Maxwell, building on the previous work of Faraday, published his paper entitled “On Faraday’s Lines of Force” in which he outlined a physical geometry of lines of force model. In 1861-62, Maxwell expanded his earlier ideas to develop a physical representation of lines of force, to describe a physical mechanics of the field.

Hmolscience
In hmolscience, one of the first to use lines of force arguments was American historian Henry Adams:

“The object of education should be the teaching [of] how to react with vigor and economy. No doubt the world at large will always lag so far behind the active mind as to make a soft cushion of inertia to drop upon; but education should try to lessen the obstacles, diminish the friction, invigorate the energy, and should train minds to react, not at haphazard, but by choice, on the lines of force that attract their world.”

German physiologist Wolfgang Kohler (1887-1967), student of Max Planck, who spent 1907-1909 at the University of Berlin focused on a link between physics and psychology, supposedly, in his early work with apes, employed some type of Faraday-based lines of force model of movement, which John Martin summarizes as follows: [6]

“In his early work with apes (1917), Kohler had described their movement in some cases using a metaphor of traversing one of the ‘lines of force’ that Faraday saw emerging from magnets. One example was the inability of an animal near a desired object to move away in order to take a successful indirect path around an intervening obstacle, this inability increased the closer the animal came to the object, such that an animal beginning on an insightful, indirect path might be drawn helplessly to the object if it came too near it and would end up abandoning the successful initial plan. In such cases, the action of the animal would be better explained by proposing that the object had a gravity0like pull than by attempting to explain the animal responding to differential stimuli from the environment.”

In 1945, American physical historian Morris Zucker, following the lead of Adams, employed lines of force descriptions in his history theories:

“We will soon have the occasion to discuss the social philosophies of some really great physicists when they deign to pass judgment on social questions. Here we are concerned with an attempt to engraft ‘relativist’ history through the medium of relativist phraseology. The frame of reference, lines of force in a gravitational field, the time-space continuum, all these are noble conceptions in physics where they are endowed with precise meaning and have been subjected to experimental proof. Writers have attempted to smuggle these conceptions into history by the simple expedient of employing the same idioms. They sound the same, but have not the same meaning. Let them use facts instead of phrases, proof instead of analogies.”

“[Zucker’s] positive interest is the new physics of Einstein and his twentieth-century associates. He believes that history like matter is made up of fields of force which have definite and predictable relationships, and of lines of force which can be traced in the past and projected into the future so that the historian may prophesy.”

In circa 1955, Polish novelist Witold Gombrowicz penned his Pornografia wherein he utilized a mixture of Faradays’s lines of force and Goethe’s 1799 theory of human chemical affinities to explain human passions and desires. [4]

French philosopher Gilles Deleuze, is said to have used “lines of force” theories somewhere in his arguments and discussions. [7]