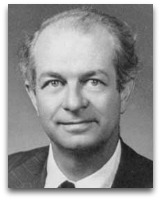 In existographies, Linus Pauling (1901-1994) (IQ:190|#29) [RGM:182|1,500+] [GCE:#] (EPD:F9) (CR:85) was an American chemical engineer noted for his work on the nature of the chemical bond and for his later years debates and discussions on the chemical and thermodynamic nature of the question “what is life?”, such as in his 1970 biochemistry chapter, and his 1987 conference presentation “Schrodinger’s Contribution to Chemistry and Biology” wherein he attacks — or more correctly "rips apart" — Austrian physicist Erwin Schrodinger’s 1943 negative entropy formulation solution to the question of what life is, a solution that Schrodinger had to famously defend in his infamous Note to Chapter 6. [1]

Early years
Pauling, interestingly, is part of the early parental death and genius group, a phenomenon common to scientific revolutionists and double Noble Prize winners, of which Pauling is the latter variety. In particular, Pauling's father dereacted (died) when he was nine and he would go on to win the Nobel Prize in chemistry in 1954 and the Nobel Prize in peace in 1962. Only three others, namely Marie Curie, John Bardeen, and Frederick Sanger, have one two Nobel Prizes, and of this exceedingly rare group: 3 out of 4 were the product of early parental death.

Overview
Pauling had a startup chemical company (before age 15); BS in chemical engineering age 21 (1922), during which time he became aware of the work of Gilbert Lewis (IQ=190) and Irving Langmuir on the electronic structure of atoms and their bonding to form molecules, PhD in physical chemistry and mathematical physics (1925), then (1926) to Europe on a Guggenheim Fellowship, to study under Arnold Sommerfeld (IQ=180) in Munich, Niels Bohr (IQ=185) in Copenhagen, and Erwin Schrödinger (IQ=190) in Zürich, during which time he became interested in how quantum mechanics might be applied in his chosen field of interest, the electronic structure of atoms and molecules; also, in Zürich, Pauling was also exposed to one of the first quantum mechanical analyses of bonding in the hydrogen molecule, done by Walter Heitler and Fritz London; after which he became one of the first scientists in the field of quantum chemistry and a pioneer in the application of quantum theory to the structure of molecules; his 1939 The Nature of the Chemical Bond has been referred to as the “bible” of modern chemistry [4]; gets upgrade for, in 1989, ripping apart Schrodinger's thermodynamic views on life (see: Note to Chapter 6).

Interestingly, and some might say astonishingly, in 1917, as an undergraduate chemical engineering student, at Oregon Agricultural College, Pauling was taught the Dalton-version of hook-and-eye bonding model, which was the vogue description of bonds between atoms at the time. Each atom had a certain number of hooks that allowed it to attach to other atoms, and a certain number of eyes that allowed other atoms to attach to it. A chemical bond resulted when a hook and eye connected. Pauling, however, of course, wasn't satisfied with this archaic method and looked to the newly-emerging field of quantum physics for a new method. [2] By 1932, Pauling had developed the hybrid orbital model of chemical bonding and his famous 1939 textbook The Nature of the Chemical Bond, which he interestingly dedicated to Gilbert Lewis, would go on to become referred to as “Bible of modern chemistry”.

What is life?
In opening to his biochemistry chapter of the 1970 edition of his General Chemistry, Pauling asks the following: [3]

“What is it that distinguishes a living organism, such as a man or some other animal or a plant, from an inanimate object, such as a piece of granite?”

In response to this question, in a somewhat ambivalent manner, he answers that it must have internal metabolic reactions and the capacity for reproduction. He then abjures from this position, in some sense, by bring up the question of whether or not the virus (or virus molecule) is alive? He comments on this:

“If we were to define a living organism as a material structure with the power of reproducing itself, then we would include the plant viruses among the living organisms. If, however, we require that living organisms also have the property of carrying on some metabolic reactions, then the plant viruses would be described simply as molecules, with molecular weight of the order of magnitude of 10,000,000, that have a molecular structure as to permit them to catalyze a chemical reaction, in the proper medium, leading to the synthesis of molecules identical with themselves. The giant virus particles or molecules may be described as aggregates of smaller molecules, tied together in a definite way.”

This teetering point of view, as we see, is leaning towards the defunct theory of life position: namely that when one starts to view all animate things as large molecules with molecular weights that obey stoichiometry the premise of defining a molecule as being "alive" becomes unwieldy to the point of being untenable following prolonged introspection. In other words, if Pauling were to have arrived at the human molecular hypothesis and envisage humans "simply as molecules", as he says, or "human molecules", the above statement could be rephrased as:

“[Humans can] be described simply as molecules, with molecular weight of the order of magnitude of (add), that have a molecular structure as to permit them to catalyze a chemical reaction, in the proper medium, leading to the synthesis of molecules identical with themselves.”

“By virtually any standard of measure, Linus Pauling ranks as one of the most-influential and celebrated scientists of the twentieth century. Pauling’s The Nature of the Chemical Bond, in its three editions and numerous translations, is the most cited scientific book of all time.”

“Only when I began studying chemical engineering at Oregon Agricultural College did I realize that I myself might discover something new about the nature of the world.”