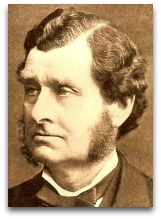 In hmolscience, Lionel Beale (1828-1906) was a British physician and microscopist noted for his 1870 Protoplasm: Life, Force, and Matter, and publications into the 1880s, wherein he digs in to the life from non-life debate, arguing to the effect that the physical view of life is untenable, and therein siding with his own peculiar brand of vitalism, which holds that because there is a difference between how a so-called “living” cell responds to staining, as compared to a non-living cell, that the nucleus must hold the “bioplasm” or essence of life.

Bioplasm | Stain reaction theory
Beale discovered that the nucleus of active (living) organisms stained with basic dyes, while those of non-active (nonliving) organisms stained with or were more apt to stain with acid dyes. On this basis, Beale reasoned that the more acid and organelle appeared to be, the more “vital” its activities were, after which he (1878) and others, such as John Drysdale (1874), came to believe that the nucleus must contain the essence of life or bioplasm. [2] The following are a few example quote of Beale’s position:

“The opinion that life is a form or mode of energy or motion has for many years past been gaining an increased number of advocates, and now appears to be very generally entertained and taught by scientific men. The idea that life is a power, force, or property of a special and peculiar kind, temporarily influencing matter and its ordinary forces, but entirely different from, and in no way correlated with these, has been ridiculed, and is often spoken of as if it were too absurd to require refutation.”

“The physical theory of life [holds that] that a living, moving, growing thing is but a force-created, force-impelled machine. [Physical life theorists] teach that life is but a mode of ordinary force, and that the living thing differs from the non-living thing, not in quality, or essence, or kind, but merely in degree; and yet they cannot satisfactorily explain the difference between a living thing and the same thing dead. They would perhaps tell us that living and dead are only relative terms; that there is no absolute difference between the dead and living states; and that the thing which we call dead, is, after all, only a few degrees less actively living than the thing we say is alive. But is this sort of reasoning convincing, seeing that although matter in the living state may suddenly pass into the dead state, this same matter can never pass back again into the living condition? Those who advocate this doctrine do not believe in the actual annihilation of force, when a living thing suddenly passes from the living into the dead state; but they do not demonstrate the new form or mode which the departing life-energy assumes, or explain to us what in their opinion becomes of it. If the dead thing only differs from the living thing by a few degrees of heat or units of force, why can we not, by supplying more heat or force, prevent dissolution, or cause the actions to go on again after they have once stopped?”