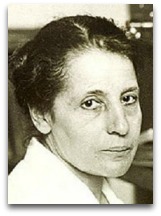 Overview
In Dec 1938, Meitner, on a walk with her nephew Otto Frisch, figured out, based in part on Niels Bohr and George Gamow’s suggestion that a nucleus might be akin to a liquid drop, which after becoming a certain size could split into two new droplets, that, via Einstein’s mass-energy equivalence formula, the difference between the original uranium mass and the fragments, was converted into 200 MeV of energy, therein solving the then standing puzzle of uranium splitting, i.e. nuclear fission. [1]

Education
Meitner completed her PhD under Ludwig Boltzmann, on an experimental proof of one of Maxwell's equation, after which she studied under Max Planck.
Quotes | By
The following are quotes by Meitner:

“Science makes people reach selflessly for truth and objectivity; it teaches people to accept reality, with wonder and admiration, not to mention the deep awe and joy that the natural order of things brings to the true scientist.”

“Even as a child I was strongly interested in mathematics and physics, and as I grew up I also developed a very pronounced inclination for social responsibility.... When I was 23 years old and about to enter the university, I entertained the idea of primarily pursuing medicine, for its social usefulness, and studying mathematics and physics only at the side. My father kept me from this incorrect choice by making it clear to me that such a course of study might be possible for a genius like Hermann Helmholtz, but not for another person.”