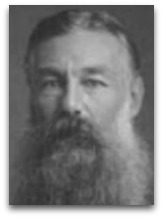 In existographies, Conway Lloyd Morgan (1852-1936) (CR:11), commonly cited as “C. Lloyd Morgan” or Lloyd Morgan, was a British animal psychologist, characterized a "religiously minded biologist" (Russell, 1931), noted, in hmolscience, for his 1929 book Mind at the Crossways, wherein he delves into the complex crossroads (see: unbridgeable gap) of the relation between the atomic view (molecule view) and the evolution view (organism view), the gist of which, however, rooted in his underlying belief that there is a "divine purpose" underlying evolution, which he refers to as "emergent evolution". [4]

British emergence school
Morgan, according to Terrence Deacon, is classified, along with C.D. Broad and Samuel Alexander, as being part of the "British emergentists", all three said to have been influenced by the prototype emergence ideas of John Mill and George Lewes. [3]

Molecular organisms
The following is Morgan's digression of the merits of Alfred Whitehead's idea of atoms and molecules as types of "organisms" in the same sense as are humans: [1]

There has been much discussion as to the acceptance or rejection of this extended usage, under which a molecule or atom as well as an oak tree, a rabbit, or an ameba, may be spoken of and discussed as an organism, though of course not a living organism. I am one of those who accept this extended usage. Of these terms the molecule, as an organism, is a community of atoms, as members in molecular fellowship.”

Morgan’s italicized mention of a non living organism seems to indicate that he was digging around in the subject of what has come to be known as the defunct theory of life, namely that what previously was considered alive is but higher levels, behaviors, and extended existences of types or species of animate matter (reactive motile chemicals or large moving molecules, so to speak).

Biocule
Morgan defined “biocules”, somewhat humorously, as “organisms in which molecules play their parts at the inception of the life-game”.

Construct
Morgan, in his Animal Life and Intelligence, as discussed by Karl Pearson, proposes the use of the term "construct" for an external object. [2]

Influence | Human molecule
Morgan’s discussion of the “biocule” was a investigative stepping stone that led American civil-ecological engineer Jeff Tuhtan to the concept of the human molecule, as historically summarized in American electrochemical engineer Libb Thims’ 2008 The Human Molecule, introducing Tuhtan to the application of thermodynamics to animate systems, an important feature of his 2011 thermodynamics-based PhD dissertation “A Modeling Approach for Alpine Rivers Impacted by Hydropeaking Including the Second Law Inequality”.