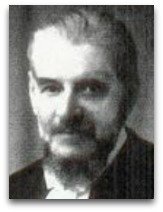 In existographies, Louis Bachelier (1870-1946) (CR:4) was a French mathematician noted, in human physics, for his 1900 PhD thesis The Theory of Speculation, written under his advisor Henri Poincare, a publication focused on determining the probability of price changes, via using Brownian motion to evaluate stock options, which according to Gheorghe Savoiu and Ion Siman, is said to mark the start of the econophysics. [1]

Bachelier, in short, built on the work of Jules Regnault, and used a random hypothesis to treat securities prices similar to gas molecules, moving independently of each other, with future movements being independent of past movements. [2]

In the mid-1950s, Bachelier’s 1914 Games of Gambling, Chance, and Risk (Le jeu, la chance et le hasard) was discovered, in the Yale library, by statistician Leonard Savage, who in turn sent several postcards to colleagues to see if anyone was familiar with his work; one went to Paul Samuelson, who whet searching for his book in the MIT library, and therein found his PhD dissertation, who thereafter began to revive his work. [3]