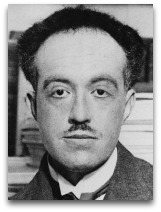 In existographies, Louis de Broglie (1892-1987) (IQ:180|#194) [GPE] (CR:21) was a French physicist, noted for his 1924 proof that any kind of particle, whether atom, electron, photon, or even a bullet or a planet must have associated with it a wave, which is not material, but whose strength tells the probability of its presence

Overview
In 1924, de Broglie gave a proof that any kind of particle, whether atom, electron, photon, or even a bullet or a planet must have associated with it a wave, which is not material, but whose strength tells the probability of its presence, whose wavelength is: [1]

where h is Planck’s constant and p its initial momentum. De Broglie, in retrospect, summarizes the origin of his wave mechanics as follows: [3]

“I presented the first principles of wave mechanics in three Notes that appeared in Comptes rendus of Septempber-October 1923 and later gave a more elaborate version in my Doctoral Thesis submitted on 25th of November, 1924. My essential idea was to generalize for all particles the coexistence of waves and particles which had been discovered by Einstein in 1905 for the case of light and photons. In conformity with the clear ideas of classical physics, I tried to imagine a real physical wave which transported minute and localized objects through space in the course of time.”

De Broglie then goes on to explain the two ways he went about doing this.

The Heisenberg uncertainty relation, supposedly, is derived or rather a necessary consequence of the above de Broglie wavelength equation. [2]

Quotes | By
The following are quotes by Broglie:

“In classical thermodynamics, we introduce in order to enunciate the second principle of this science the magnitude ‘entropy’, the physical meaning of which remained so obscure that Henri Poincare called it ‘prodigiously abstract’.”

“It was Boltzmann who, by developing the ideas of statistical thermodynamics, gave us the real meaning of this quantity by showing that the entropy S of the state of a body is connected to to the probability P of this state by the famous formula: S = kB ln P [...] in Analytical Mechanics [...] the real meaning of Hamilton’s principle is the following: The movement of a body is that which has the greatest thermodynamic probability under the conditions to which is subjected. I think that this conception of the deep nature of the Hamiltonian principle casts a stream of light upon real meaning, analogous to that which Boltzmann's formula casts on the meaning of entropy.”