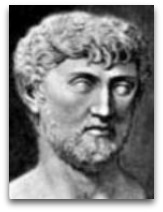 Consciousness
Lucretius, according to Jennifer Hecht (2004), explains consciousness via the following logic: [19]

“Now of necessity you must admit that sensate things must even so consist of insensate atoms. From the insensate, animal life is born.”

Origin of life
Lucretius, in his “On the Nature of Things”, opens, supposedly, to a praise of Venus for creating the multitude of life on earth, and how she conquered the ruling Mars with the power of love; the Martin Smith rendition of this Venus hymn reads as follows: [17]

“First, goddess, the birds of the air, pierced to the heart with your powerful shafts, signal your entry. Next wild creatures and cattle bound over rich pastures and swim rushing rivers: so surely are they all captivated by your charm and eagerly follow your lead. Then you inject seductive love into the heart of every creature that lives in the seas and mountains and river torrents and bird-haunted thickets, implanting in it the passionate urge to reproduce its kind.”

A supposed visual rendition of this, by artist Botticelli (c.1483), is as follows, wherein the sea from which Venus emerged (Ѻ) can be seen in the distant background, and wasps around the head of Mars, supposedly, signifying pain or death: [1]

Here, in respect to Lucretius' mention of the common people believing that the goddess Venus created life, we might compare the following:

“The poets, through the conjunction of fire and moisture, are indicating that the vis, ‘force’, which they have is that of Venus [Aphrodite]. Those born of vis have what is called vita, ‘life’, and that is what is meant by Lucilius (c.120BC) when he says: ‘life is force you see: to do everything force doth compel us’.”

Inertia | Acceleration
Lucretius explains that atoms in a vacuum, regardless of size, would fall at the same rate, thus anticipating Galileo's 1589 Leaning Tower of Pisa (Ѻ) experiment, wherein he dropped two spheres of different masses to demonstrate that their time of descent was independent of their mass, thus proving that objects fall with the same acceleration, irregardless of mass; which thus disproved Aristotle's theory of gravity, according to which objects fell at a speed relative to their mass. [1]

Death | Violent
Lucretius explains that a violent death is an event wherein there is such a drastic rearrangement of atoms that the body can’t regain its original form, say as opposed to a wound that can hear, wherein the atoms can regain their original form. [1]

Evolution
Lucretius was one of the first to outline an atomic theory of evolution. [3]

“Many kinds of creatures must have vanished with no trace
Because they could not reproduce or hammer out their race.
For any beast you look upon that drinks life-giving air,
Has either wits, or bravery, or fleetness of foot to spare,
Ensuring its survival from its genesis to now.”

Lucretius explained, via atomic theory, that creatures that don’t have a useful configuration of atoms won’t be around long, because it won’t fit in to the natural environment, thus anticipating Darwin by some eighteen centuries. [1]

Gods
Lucretius does not dispute the existence of gods, but asserts that they are made of atoms, like humans, and that they are not involved in the day-to-day goings on of humans. [1] The objective aim of Lucretius is as follows:

“My object is to dispel the fear of the gods, which arises simply from the fact that there are so many things which men do not yet understand, and therefore imagine to be effected by divine power.”

— Lucretius (55BC), synopsis regarding gods, summarized by Balfour Stewart and Peter Tait [6]

On religion, Lucretius held the view that: [2]

“Fear was the first thing on earth to make gods.”

Soul
Lucretius, supposedly, was an "asoulist", i.e. he posited that (5:13-6:13) the soul does not exist; per logic that it can’t be seen or touched, it is not necessary to explain anything in particular, and to find the point when it came into existence, if in fact it did exist, is an insoluble problem; hence, there is no need to worry about what happens after one dies, and moreover that the warnings of priests are not to be taken seriously, because they are ignorant about the true nature of the gods. [1]

In other contexts, however, Lucretius seemingly argued (Hecht, 2004) that the soul exists, but that it dies with the body. [14]

Atheism | Morality
Lucretius is categorized as a “functional atheist” (6:38-6:50), i.e. he admitted that gods, made of atoms, may exist, but morality was in the hand of humans, and the “gods were not involved in deciding what was right or wrong”. [15] The school of thought of Lucretius, Epicurus, Democritus, and Leucippus, according to Francis Bacon, is the school “most accused of atheism”, historically speaking. The four of them are sometimes known as the "original" four horsemen of atheism.

Beginnings | No design
Lucretius, in respect to speculations about the beginnings of things, aka “first cause” in Aristotle speak, as cited by Lawrence Henderson (1917), states the following: [13]

“But in what ways yon concourse of matter founded earth and heaven and the deeps of the sea, the courses of sun and moon, I will next in order describe. For verily not by design did the first-beginnings of things station themselves each in its right place by keensighted intelligence, nor did they bargain sooth to say what motions each should assume, but because the first-beginnings of things many in number in many ways impelled by blows for infinite ages back and kept in motion by their own weights have been wont to be carried along and to unite in all manner of ways and thoroughly to test every kind of production possible by their mutual combinations, therefore it is that spread abroad through great time after trying unions and motions of every kind they at length meet together in those masses which suddenly brought together become often the rudiments of great things, of earth, sea and heaven and the race of living things.”

About
Little information is known about Lucretius, other than the few details that: he was a Roman citizen, friend of Roman poet and politician Gaius Memmius (c.90-49BC), that Cicero, in 54BC, in a letter to his brother, was praising the “poems of Lucretius”, and that Latin poet Catullus (c.84-54BC), in his circa 60BC poem 64, was citing Cicero. [7]

Materialism
Lucretius’ philosophy, according to Richard Jenkyns (2006), is a strict materialism, which denies the existence of anything magical, mysterious or transcendent.

Bond theory | Hooked atoms
Curiously, Lucretius’ theory of hooked atom chemical bonding held sway in the minds of chemists all the way into the early 20th century, until interred by those as Gilbert Lewis and Linus Pauling, who were still being taught variants of hooked atom theory in college.

Free will
The following is a noted quote attributed to Lucretius in regards to the question of free will in an atomic universe: [4]

“Again, if motion is always one long chain, and new motion always arises out of the old in order invariable, and if the first beginnings do not make by swerving a beginning of motion such as to break the decrees of fate, that cause may not follow cause to infinity, whence comes this free will in living creatures all over the earth, whence, I say, is this will wrested from the fates by which we proceed with pleasure leads each, swerving also our motions not a fixed times and places, but just where our mind has taken us?”

Influence
The early influence of Lucretius is summarized by Jennifer Hecht (2004) as such: [19]

“Lucretius was read and studied by the general populous as well as the leading figures of Roman literature for centuries. He had a tremendous impact on Virgil, e.g., and Ovid loved his materialism and mockery of the traditional gods. Ovid’s own best statement on the subject was, ‘it is convenient that there be gods, and as it is convenient, let us believe there are.’ That does seem to have been the mood. Lucretius, by the way, died without putting his poem into published form; Cicero did that for him.”

American president and thinker Thomas Jefferson owned at least five Latin editions of Lucretius’ 55BC On the Nature of Things, as well as translations into other languages. [9]


Some, if not many, of these so-called predictions, as Victor Stenger notes, are “stretching things a bit”; nevertheless an interesting first jab at uncharted territory. [12]

Reaction end | Love philtre
Lucretius’ reaction end (death), according to Illyrian Latin Christian priest, theologian, and historian St. Jerome (347-420) for the entry of 94 BC of some book, was said to have died by his own via drinking a love potion: [5]

“Titus Lucretius, poet, is born. After a love-philtre had turned him mad, and he had written, in the intervals of his insanity, several books which Cicero revised, he killed himself by his own hand in the forty-fourth year of his age.”

This story about Lucretius being driven mad by a love philtre, later immortalized by Alfred Tennyson, according to translator A.E. Stallings, is a doubtful one in regards to truth. [8]

Quotes | On
The following are Lucretius related quotes:

“Happy is he who has discovered the causes of things and has cast beneath his feet all fears, unavoidable fate, and the din of the devouring underworld.”

“Lucretius' high rank as one of the most distinguished poets of all times is the result of his highly productive skill of sensory perception, which makes him capable of vigorous representations, and further of his lively imagination, which allows him to track the perceived objects even beyond the reach of the senses down to the imperceptible depths of nature and most secretive recesses.”

“You are right; we must speak with respect of Lucretius; I see no one who can compare with him except Byron, and Byron has not his gravity nor the sincerity of his sadness. The melancholy of the ancients seems to me more profound than that of the moderns, who all more or less presuppose an immortality on the yonder side of the black hole. But for the ancients this black hole has the infinite itself; the procession of their dreams is imaged against a background of immutable ebony. The gods being no more and Christ not being not yet, there was between Cicero and Marcus Aurelius a unique moment in which man stood alone. Nowhere else do I find this grandeur; but what renders Lucretius intolerable is his physics, which he gives as if positive. If he is weak, it is because he did not doubt enough; he wished to explain, to arrive at a conclusion!”

“Lucretius must have observed the moral breakdown that accompanied the dissolution of the old ways as Romans struggled to rise from institutions adequate for small city-state to standards and institutions that they hoped would be adequate for governing the world empire.”

“No man awakes, whom once the ice end of living overtakes.”

“Fools admire and like all things the more which they perceive to be concealed under involved language, and determine things to be true which can prettily tickle the ears and are varnished over with fine sounding phrase.”