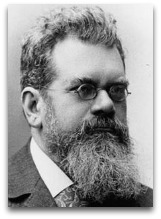 In existographies, Ludwig Boltzmann (1844-1906) (IQ:195|#15) [RGM:618|1,500+] [Kanowitz 50:44] [Cropper 30:1|SM] (GPE:26) (RE:62) [CR:364] was an Austrian physicist and thermodynamicist, of the Vienna school of thermodynamics, a semi-categorized epicenter genius, one of the central founders of statistical thermodynamics, known for his derivation of the probabilistic or logarithmic description of entropy as a function of the molecular distributions of the body, who met his reaction end by his own hand at 62-revolutions of the earth about the sun, owing to attacks on his theory, which was soon thereafter validated.

Second law | Mechanical proof
In 1866, Boltzmann, at the age of 22, published his “On the Mechanical Significance of the Second Law of Thermodynamics”, wherein he attempts to give a mechanical proof of the second law; defining entropy as the logarithm of the average kinetic energy. [13] In this same paper, according to American neurological anthropologist Terrence Deacon, Boltzmann, supposedly, also described entropy or entropy increase in terms of increasing disorder (fact check). [14]

“Thus, one may prove that, because of the atomic movement in systems consisting of arbitrarily many material points, there always exists a quantity which, due to these atomic movements, cannot increase, and this quantity agrees, up to a constant factor, exactly with the value that I found in [a paper published in 1871] for the well-known integral ∫dQ/T.”

This is what soon came to be known as Boltzmann's H-theorem. In 1901, this statement was reformulate or rather truncated by German physicist Max Planck into the condensed form of S = k ln W. These theories on the statistical measurement of entropy in gas-phase systems are the base of logic frequently used in statistical human thermodynamics.

Humans | Molecules
In his famous 1872 article ‘Further Studies on the Thermal Equilibrium of Gas Molecules’, Boltzmann concluded, based on his comparison of humans to molecules, as discerned through a reading of English Historian Henry Buckle’s 1861 book History of Civilization, that: [4]

“Molecules are like to many individuals, having the most various states of motion, and the properties of gases only remain unaltered because the number of these molecules which on average have a given state of motion is constant.”

“The general struggle for existence of animate beings is not a struggle for raw materials – these, for organisms, are air, water and soil, all abundantly available – nor for energy, which exists in plenty in any body in the form of heat Q, but of a struggle for entropy S, which becomes available through the transition of energy from the hot sun to the cold earth.”

These famous statement later stimulated Austrian physicist Erwin Schrödinger to argue, in 1944, that that “life feeds on negative entropy.” [5] This statement, in turn, spawned a number of new terms, such as neg-entropy and neguentropy, as well as debates on the logic of this statement. According to researchers Eric Schneider and Dorian Sagan, for instance, in regards to the correctness of this statement, “except for the term entropy, which is better replaced with Gibbs free energy G, Boltzmann’s analysis is essentially modern.” [3]

Energy elements | Quantum mechanics
In 1891, Boltzmann famously commented: “I see no reason why energy shouldn’t also be regarded as divided atomically.” [10] This view, later led German physicist Max Planck, in 1900, to postulate the quantum view of an energy element, and hence the launch of quantum mechanics. In an 1886 lecture, Boltzmann gave his opinion that the nineteenth century will be remembered as the century of the ‘mechanical vision of nature’ and of ‘Darwin’s evolutionism’. [11]

Education
Boltzmann was awarded a doctorate from the University of Vienna in 1866 for a thesis on the kinetic theory of gases supervised by Josef Stefan. After obtaining his doctorate, he became an assistant to Stefan. Boltzmann later taught at Graz, moved to Heidelberg and then to Berlin, where he studied under German physician and physicist Hermann von Helmholtz. [1] One of Boltzmann’s good friends and colleges at the University of Vienna was Joseph Loschmidt, noted for being the first to draw double and triple bonds in molecules, as found in his 1861 book Chemische Studien (Chemical Studies), and to calculate the size of air molecules (1865) using the kinetic theory of gases. [6]

In thermodynamics folklore, an oft-heard comment is that the second law has something to do with pouring a glass of water into the sea. This stems from Boltzmann who in 1870 told English physicist John Strutt that the second law of thermodynamics has the same truth as the assertion that you cannot recover a tumbler of water thrown into the sea. [7]

Attacks
Before receiving acclaim into the early 20th century, Boltzmann’s theoretical initially came under attack from many directions. In 1876, Austrian physical chemist Joseph Loschmidt, Boltzmann’s mentor at the Vienna school, pointed out the reversibility paradox, otherwise known as Loschmidt’s paradox, between reversible classical dynamics and irreversible thermodynamics; thus prompting Boltzmann to write his 1877 article “On the Relation of a General Mechanical Theorem to the Second Law of Thermodynamics” in efforts to reconcile the issue. [8]

In the mid 1890s, German mathematician Ernst Zermelo criticized the mathematical and philosophical foundations. Those in the school of energetics, Austrian physicist Ernst Mach, German physical chemist Wilhelm Ostwald, and French physicist Pierre Duhem, all criticized Boltzmann’s underlying atomic model, arguing essentially that atoms did not exist, and that thermodynamics need not be based on atoms. [9] A frequent debating partner with Boltzmann was Ostwald who supposedly used Loschmidt’s paradox to argue against atomic theory, commenting in 1895 opinions such as: [12]

“The proposition that all natural phenomena can ultimately be reduced to mechanical ones cannot even be taken as a useful working hypothesis: it is simply a mistake.”

The fact that the mechanical laws work equally well forward or backward in time, meant to Ostwald that:

“In a purely mechanical world there could be a before and after as we have in our world: the tree could become a shoot and seed again, the butterfly turn back into a caterpillar, the old man into a child. No explanation is given because of the fundamental property of the mechanical equations. The actual irreversibility of natural phenomena thus proves the existence of processes that cannot be described by mechanical equations and with this the verdict on scientific materialism is settled.”

Boltzmann, who during his reaction existence (life) had a difficult time vindicating his theories, particular the supposition that atoms existed, was one of the several founders of thermodynamics to take meet their end by their own hand.

Tributes | Praise
The following are noted statements of praise and or tribute:

“In 1866, at the age of 22, Boltzmann wrote an article ‘On the Mechanical Meaning of the Second Law of the Theory of Heat’ in which he claimed to prove the second law of thermodynamics purely from dynamics, i.e. the second law was just a consequence of Newton's equations of motion. Two years later, in 1868, in a paper ‘Studies on the Equilibrium of the Kinetic Energy between Moving Material Points’ he follows Maxwell in introducing probability concepts into his mechanical considerations and discusses a generalization of Maxwell's equilibrium velocity distribution function for point particles in free space to the very general case that a number of material points move under the influence of forces for which a potential function exists, i.e. he derives the Maxwell-Boltzmann equilibrium distribution function.”

“Goethe’s Faust is perhaps the greatest of all works of art.”

“Was it a god that wrote these signs, revealing the hidden and mysterious forces of nature around me, which fill my heart with quiet joy?”

“In Europe, a grief-stricken rich woman buys a dozen cats, while in America she builds a university.”