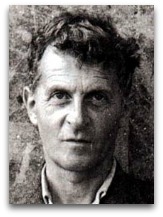 Overview
Wittgenstein’s two biggest works are Philosophical Investigations and Tractatus Logico-Philosophicus, which according to some “show more raw intellect than anything Shakespeare has written”.

Language
Wittgenstein is known for his so-called atomic fact model of language units and molecular hypothesis version of paragraphs, something to the affect that "we can speak of the world only in our language game, and otherwise must be silent" (Hecht, 2003).

Goethe-Schopenhauer | Weininger
Wittgenstein, supposedly, admired Otto Weininger. [6] Wittgenstein, as a youth, e.g. read read Weininger's Goethe-based Sex and Character, and was said to have been deeply influenced by it. Wittgenstein, in addition, commented or critiqued Arthur Schopenhauer’s Goethean-based theory of an “elective affinity will” or “will to power” (attacking one’s fears). [7]

Russell
In 1910, Wittgenstein met Bertrand Russell, thereafter becoming his pupil, but later splitting with him. [3] Some have ranked Wittgenstein above Russell in genius rankings.

Natural laws
In 1921, Wittgenstein, in his Treatise on Logic and Philosophy, aka Tractatus Logico-Philosophicus, the title supposedly being themed on Benedict Spinoza’s Tractatus Theologico-Politicus, wherein he attempted to argue the following: [4]

“At the basis of the whole modern view of the world likes the illusion that the so-called laws of nature are the explanations of natural phenomena.”

American physicist Steven Weinberg cited this quote as someone who denied the possibility of explaining any fact on the basis of any other fact. Weinberg went on to say that such “warnings leave me cold” and that “telling a physicist that the laws of nature are not explanations of natural phenomena is like telling a tiger stalking prey that all flesh is grass.” [5]

Frazer
In 1931, Wittgenstein, in his Remarks on Frazer’s Golden Bough, wherein he summarized his thoughts on James Frazer’s The Golden Bough: a Study in Magic and Religion; these notes, in turn, supposedly, became the backbone to his later more famous 1953 Philosophical Investigations. [9]

Religion
Wittgenstein, who has a large number of “god-this” and “god-that” quotes attributed to him, is oft-classified as "great Christian thinker". [2] In WWI, Wittgenstein carried a copy of Tolstoy's translation of the Bible, and was known as the "guy with the gospels". [11]

Virgin birth
In c.1950, Wittgenstein, in his notes On Certainty, stated the following about the virgin birth:

“I believe that every human being has two human parents; but the Catholics believe that Jesus only had a human mother. And other people might believe that there are human beings with no parents, and give no credence to all the contrary evidence.”

Quotes | On
The following are quotes on Wittgenstein:

Quotes | By
The following are quotes by Wittgenstein:

“I think, I have never invented a movement of thought, rather they are always given to me by others. I have merely taken them up passionately for my work of clarification. In this way Boltzmann, Hertz, Schopenhauer, [Gottlob] Frege, Russell, Kraus, Loos, Weininger, Spengler, Sraffa have influenced me.”

“Philosophy is a battle against the bewitchment of our intelligence by the means of language.”