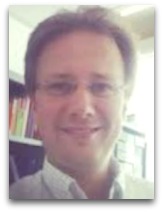 In hmolscience, Ludwig Bartels (c.1961) is a German-born American physical chemist noted for his 2005 to 2007 work on synthetic walking molecules and molecular carriers.

Overview
In 2005, Bartels group reported on 9,10-DiThioAnthracene (DTA), a heat-induced synthetic walking molecule, and 2007 work on molecular carries, i.e. walking molecules able to carry a load, like a human carrying a bundle.

“Effectively, DTA kind of rotates around each of the feet and wobbles forward or wobbles backward.”

“Carrying a load slows the DTA [carrier] molecule down. Attachment of one CO2 molecule makes the carrier need twice as much energy for a step, and a carrier with two CO2 molecules requires roughly three times the energy. This is not unlike a human being carrying heavy loads in one or both hands.”