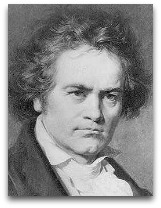 In existographies, Ludwig van Beethoven (1770-1827) (IQ:165|#234) was a German composer and pianist noted for his famous four-day 1812 meeting with German polymath Johann Goethe.

“Goethe’s poems exercise a great sway over me, not only by their meaning, but also by their rhythm. It is a language which stimulates me to composition.”

Goethe meeting
In 1812, Goethe spent four days visiting with Beethoven, a great fan of Goethe, at Beethoven's repeated quests, the interactions of which have been retold many times. Beethoven was 42, Goethe 63, with the publication of the first part of Faust four years behind him.

Of this meeting, the following vignette has come down to us, as depicted below. As Beethoven and Goethe walked, some of the nobility passed with their entourage. Goethe politely stepped aside and bowed deferentially to the nobles - while Beethoven, in a typical gesture, strode almost defiantly right through their midst, with his hands behind his back and without acknowledging the presence of the nobles, who had no alternative but to give him clear passage. When Goethe asked Beethoven how he could so disrespectfully treat these nobles, the composer replied, again characteristically, "There are countless 'nobles', but only two of us."

The the so-called "incident at Teplitz" (adjacent) was famously remade in the 1994 film Immortal Beloved, albeit not with Goethe, but with one of Beethoven's lovers.

At the close of a well-known letter dated 2 September 1812 from Carlsbad, Goethe shared with his friend, German composer Carl Zelter the following impressions of his encounter with Beethoven: [3]

“I got to know Beethoven in Toplitz. His talent leaves me in a state of amazement; he is, however, a completely intractable personality, who may not be wrong in finding the world detestable, but who surely does not thereby make it more pleasant, either for himself or for others. On the other hand, he may be forgiven this, and is to be pitied, for his hearing deserts him—a factor which perhaps afflicts the musical part of his being less than the social. He, who is already of laconic nature, now becomes doubly so through this loss.”

The following is Zelter’s September 14 reply to Goethe: [3]

“What you say about Beethoven is certainly true. I, too, admire him with terror. His worn works seem to cause him secret horror—a perception that is dismissed all too lightly in our contemporary culture. His works seem to me like children whose father is a woman or mother is a man. The most recent work of his I have come to know (Christ on the Mount of Olives, 1811) seems to me like an impurity whose very foundation and goal are eternal death. Music critics, who seem better able to grasp and agree upon almost anything but singularity and the natural, have gushed over this composer in the most curious manner, in both praise and reproach. I know musical persons who used to find themselves alarmed, even indignant, upon hearing his works, but who are now gripped with enthusiasm for them like the partisans of Greek love. The attraction of this is not difficult to understand, and yet what can come of it you have demonstrated clearly enough in your Elective Affinities.”

In the years to follow, supposedly, according to American music scholar Kristian Muxfeldt (2011) both Beethoven and Elective Affinities, were frequent conversation topics exchanged between Goethe and Zelter. Muxfeldt comments on this as follows: [3]

“Zelter hence judges Beethoven’s musical creations to be products of a similarly alarming psychic displacement, children whose father is a woman or whose mother is a man, and he imagines that like Eduard, Beethoven must recoil at his offspring. The implication—not for from the surface—that Beethoven’s music is against nature (or, truer to Goethe’s portrayal in Elective Affinities, that nature is permitted to run wild in it) is reinforced with a psychological truism: like the partisans of Greek love, Beethoven’s advocates too have found their initial indignation transformed into passionate enthusiasm.”

These commentaries on Goethe and Beethoven, by Muxfeldt (2011), to note, seem to be pure full page word-for-word reprints of the earlier synopsis by Dennis Mahoney, in his 2004 The Literature of German Romanticism. [4]

Burial
Beethoven is buried at the Central Cemetery, Vienna, the same place where the Boltzmann tombstone is located, and as recounted by American biophysicist Harold Morowitz, the cemetery caretaker often gets “Ludwig B” mixed up with the tomb of Ludwig Beethoven. [1]

"His talent astonished me, but his is a totally untamed personality, and he is not entirely wrong in finding the world detestable, though this attitude does not make it more pleasant, either for himself or others … To think of teaching him would be an insolence even in one with greater insight than mine, for he has the guiding light of genius, whilst the rest of us sit in total darkness, scarcely suspecting the direction from which daylight will break upon us."

— Johann Goethe (1811), "Commentary on his meeting with Beethoven"

"The court suits him too much. It is not becoming of a poet."

“Asking ‘why another book on thermodynamics?’ is reminiscent of the story of the man who, asked if he was going to the concert that night to hear one of Beethoven’s symphonies, replied no, he’d already heard it. Thermodynamics texts are somewhat like that. Mostly they do not say anything that other books have not said—what is left to say after Gibbs, after all?—but a lot remains in the interpretation, the nuances; authors of thermodynamics texts are like conductors—their worth is shown in the insights of their interpretation, and it seems there will always be room for new books on thermodynamics, just as there is always an audience for more performances of Beethoven.”