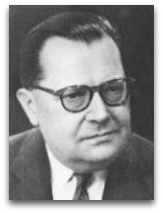 In hmolscience, Ludwig Bertalanffy (1901-1972) was an Austrian biologist noted for his 1938 to 1972 systems-conceptualized "dynamic theory of growth", a melting pot a number of theories.

Overview
In 1932, Bertalanffy began to advance his concept of the organism as an open system. [10]

In 1968, Bertalanffy introduced his general system theory, a mixture of biology, information theory (from Claude Shannon), cybernetics (from Norbert Wiener), and bit of verbal thermodynamics. [1] His significance seems to be his view of open systems in biology in contrast to the closed systems of standard classical thermodynamics. He also made contributions to biophysics, where he is perhaps best known for his 1938 derivation and development of the von Bertalanffy growth function, which is still used in fisheries science today. [2] Bertalanffy’s theory, albeit very crude in a thermodynamic sense, has been very influential to many novice researchers, e.g. Dick Hammond, who would wish to simply apply systems theory to biology and sociology, without the attached mathematical rigor of thermodynamics proper.

In 1981, Bertalanffy, in his posthumous A Systems View of Man, argued the view, as summarized by Alicia Juarrero, that “when living things are embedded in an orderly context, properties emerge that are not present when things exist as isolated individuals”. [7]

Open systems theory
Bertalanffy’s general view of thermodynamics, for instance, is that: “thermodynamics expressly declares that its laws apply only to closed systems.” In the correct sense, chemical potential and mass flow terms, among other variables, are accounted for in open systems of chemical thermodynamics. In any event, he states that:

“Obviously the conventional formulations of physics [thermodynamics] are, in principle, inapplicable to the living organism qua open system having steady state, and we may well suspect that many characteristics of living systems which are paradoxical in view of the laws of physics are a consequence of this fact.”

To resolve this conflict he outlines his theory of open systems, by stating that:

“In open systems, however, we have not only production of entropy due to irreversible processes, but also import of entropy which may well be negative. This is the case in the living organism which imports complex molecules high in free energy. Thus, living systems, maintaining themselves in a steady state, can avoid the increase of entropy, and may even develop towards states of increased order and organization.”

He then devotes considerable effort to substantiate this view via information theory and cybernetics in developing his general system theory. [1]
The basis of Bertalanffy's open system approach to the study of animate systems (organisms) follows from the observation that in order to persist and develop over time, such systems must follow the law of mass action. [3] In his 1938 work, he cites Dutch chemist and Nobel prize winner van't Hoff's 1896 book on the development of chemical kinetics, where he states that the use of a kinetic approach is required. [4] Bertalanffy deemed a kinetic approach necessary to study the growth of organisms, following the law of mass action because the approaches hitherto offered by physical chemistry dealt with homogeneous, heterogeneous, or condensed systems at equilibrium, whereas the study of growth required the consideration of a dynamic equilibrium. He defined growth as the result of the interaction between anabolism and catabolism of the system's chemical constituents. [5] The change in mass of an organism over time does not include excess water weight, and can be estimated using an ordinary differential equation:

or alternately in integral form as:

is the rate of substance uptake (mass/time),

is the conversion rate (1/time),

is the mass of the organism,

is the initial mass (e.g. egg mass) of the organism, and

is the time. As an example of how the equations can be used, during starvation experiments all terms including the uptake,

can be set to zero in order to solve for the organism's individual conversion rate,

Specifically, the approach takes note of the fact that the rate of animate system growth is not constant, but changes during ontogenesis, increasing in the earlier stages and decreasing in the later stages. The reason behind this rate variation is that for stationary systems following the law of mass action, the metabolic processes breaking down its chemical constituents (catabolism) tend to be a function of the system's overall mass, whereas the creation and growth (anabolism) processes are associated with the system's surface area. [3] One of the results in applying the steady-state principle to study animate system growth and development is the recognition that when perturbed, the system will manifest forces oriented against the disturbance in order to return to the steady-state. Therefore, physiochemically it can be seen that open systems exhibit "responses" or "behaviors" which are actually the result of the Le Chatelier principle. [5]

Social systems
In his systems theory, Bertalanffy considered a human being to be an “active personality system” and sociology to be the study of social systems. He argues that by application of his general system theory one can model the spread of rumors by generalized diffusion equations and the flow of automobile traffic by kinetics and thermodynamics. [1]

Discussion
There are particular features of Bertalanffy's 1938 formulation of his "dynamic theory of growth" which may be non-intuitive and are thus worth discussion:

1. Growth is proportional, and its rate of change is a function of an individual's specific morphology. During stages of ontogenesis in which geometric similarity holds, definite relations can be derived to describe the surface area,

is a representative linear dimension of the organism (e.g. height, width, length), and

2. Due to proportional growth, there exist simple mathematical relationships between the rates of change of volume, area, and length:

Thus it can be seen that it is expected that an organism's rate of surface area grows at twice the rate of its representative linear dimension, and its volume three times as fast.

Building on the previous formulations, Bertalanffy formulates the change in volume of an organism in time as the interplay of competing building and destructive processes:

is a constant used in determining the "constructed volume" and

the "decomposed volume" contributions. The expression can be reformulated to better include experimental data in cases where it is easiest to measure the growth of a linear dimension of organisms during ontogensis (e.g. the body length) as: [3]

Here it is important to notice that

has units of length/time, and

1/time. Recalling the proportional growth relations above, it is possible to define two new constants,

This results in the differential form of the von Bertalanffy growth formula:

or alternately in integral form as:

A modified version of the growth formula was derived in 1984 by American engineer Robert Balmer and fitted to experimental values of the metabolic dissipation of the fish (Nothobranchius guentheri) in order to develop an entropy model for biological systems:

(mW/g) is the metabolic dissipation,

are the initial and final masses of the individual, respectively, and

(1/months) are empirical constants. [6] In addition to his formulation of the growth equation, Bertalanffy rejects teleology and instead posits that open systems in the steady-state have equifinal end states, independent of initial conditions. [1]

Quotes | About
The following are quotes on Bertalanffy:

“The so-called ‘organismic biologists, e.g. E.S. Russell (1931), John Haldane (1921, 1931), and Ludwig Bertalanffy (1952, 1962), have repeatedly urged that the temptation to search always for mechanistic or physiochemical explanations of organic phenomena be resisted, and that biology be recognized as a science with a logical and conceptual structure of its own.”

“Biology, growing up under the shadow of physics, has languished like a plant deprived of light.”