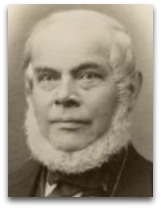 In hmolscience, Ludwig Colding (1815-1888), Ludvig (in Danish), was a Danish civil engineer noted for his 1840 "perpetuity of force" theory and his 1843 attempt to measure heat generated by a brass sled on tracks of various constitution, one of the first mechanical equivalent of heat experiments, data from which he aimed to establish a force conservation theory in order to validify the theory of the immortality of the soul or the force of the soul, or something along these lines.

Overview
In 1840, Colding proposed some type of "principle of the perpetuity of force", an early variant of the conservation of force, and later conservation of energy, which held that there existed a constancy of force: transformations could occur, but the among remained fixed. A retrospect Nature biography defines Colding as such: [1]

“In 1843 he wrote his ‘Theses Concerning Moving Forces’, a paper which entitles him to a place among the founders of thermodynamics.”

Colding conceived of what he called his "principle of perpetuity of force" in 1840, but was persuaded (by someone) to postpone publication or enunciation of his principle until he obtained some empirical support. The experiments he conducted involved the measurement of the heat generated by a brass sled on tracks of various constitution. His results were reported to the Royal Danish Society of Sciences in 1843, but the paper was refused publication by its Transactions. [4]

In 1853, Colding worked with Danish chemist Julius Thomsen, notable for his theories in thermo-chemistry, to show that cholera can spread through drinking water. [2]

In 1856, Colding reflected on the origin of his theory as follows: [3]

Colding thus reasoned that if, according to religious philosophy, the soul of a person is immortal, then so to there must correspond a natural force constituent of the soul so to quantify this effect.

Colding, as summarized by Helge Kragh, believed that spiritual activity was a higher form of energy and that the law of conservation of force proved the immortality of the soul and that God had created the world out of nothing. [5]

Colding seemed to have arrived at his principle of the conservation of force owing to his conviction in assumed continuity between the movement of life and death in the construct of the theory of the imperishability of the human soul. In short, similar to other thermodynamics founders, Colding was stimulated into theorizing owing to his religious convictions.