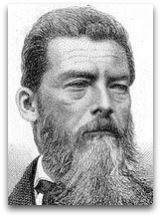 In existographies, Ludwig Feuerbach (1804-1872) (IQ:170|#376) (Cattell 1000:948) [RGM:227|1,330+] (FA:101) (GA:8) (CR:77) was a German philosopher and anthropologist, a top ten extreme atheist, noted for his 1841 The Essence of Christianity, wherein he outlined some type of inconsistent atheism (Max Stirner, 1844), focused on the question: "did god create man? Or did man create god?", tending to side with the latter.
Influenced
Feuerbach influence: Ludwig Buchner, Karl Marx, Friedrich Engels, and in turn Russian atheism, initiated by Vladimir Lenin, and supposedly Sigmund Freud.
Death | Immortality
In 1830, Feuerbach, ending his ride, supposedly, on the so-called Hegelian bandwagon, anonymously published Thoughts on Death and Immortality, a work which created a scandal by portrayal of Christianity as an egoistic and inhumane religion, which cost him his job and, to some extent, his career. In this work, he denied the traditional Christian concept of the immortality of the soul; and argued the following variety of logic: [6]

“Everything that exists is not without end and limit, even including the infinite … Thus, the essence and life of a thing is measure, form, kind, law. And this measure, by and within which a thing is what it is, is not something that extends only to a certain matter—for instance, the chemical components—but is a measure that penetrates everything, determines everything, dwells in everything. The entire life and essence of a thing is thoroughgoing determinateness, is one all-present measure. The proportion, for instance, of the chemical matter of a fish is not just something to be weighed and enumerated; but its organism, its entire body, also has its determinate form and habitus [or condition], which distinguish it from other animals. And what else is this habitus but measure, limit? Equally, the external relation of this fish is no boundless, indeterminate, indiscriminate relation. It moves itself, but it has movement determined by its shape. It lives in a determinate climate, in a determinate element, water, but again not in any water, but in a determinate spring, river, or sea. Ocean water is as much water as that which flows in a river, and yet this fish, just because it can never escape the limit that is the center of its nature, the limit that determines and includes everything that exists in it, can live only in this and no other water.”

“If there is life after death, there cannot be life before death.”

Feuerbach both denied immortality and affirmed death as that which makes the continuity of human beings with our natural environment most evident. [8] Feuerbach argued that recognition of this continuity—urged upon us by the fact of our eventual death—is prerequisite to a fully lived life, and that Christianity (especially Protestant Christianity) makes the full life impossible by virtue of its emphasis on personal immortality (Massey xi). It was in this emphasis on material, earthly life that Feuerbach departed from Hegelian philosophy. This parting of ways was based primarily on Hegel's interpretation of religion where religion was placed as a grand part of the dialectic movement of history. Feuerbach rejected this notion of religion for a more typically enlightenment view, which saw the passing away of religion as a key to the progress of scientific society. [7]

Extreme atheism
Feuerbach, in his later years, was said to have become an extreme atheist, of sorts, e.g. he was one of the seven people employed as opening quotes to co-extreme atheist Ludwig Buchner’s 1884 (4th English edition, based on the 15th German edition) Force and Matter: Principles of the Natural Order of the Universe, with a System of Morality Based Thereon, along with Orges, La Mettrie, H. Tuttle, F.J. Pisko, Ph. Spiller, and Goethe. [2]

Christianity | Nitric acid
In 1850, Feuerbach, in his The Natural Sciences and the Revolution, asserted that philosophy should no longer side with theology but rather now instead align its views with the natural sciences, chemistry in particular; the work of Dutch physiologist Jacob Moleschott, e.g. his Theory of Foodstuffs: For the People, in particular, which asserted to have solved the mind-body problem (Ѻ) via the logic of the chemistry of digestion. Feuerbach, here, famously prophesized that one day modern science, anchored in chemistry, would dissolve Christianity in nitric acid; a quotation of which is as follows:

“Feuerbach saw the scientific revolution coming; it would be a time that would ‘dissolve the Christian world-view in nitric acid’.”

The revolution here alluded to is the Goethean revolution, still not yet even begun. Another variant of the Nitric acid statement is as follows:

“Christians … hadn’t they heard, as one skeptic famously put it, that modern science had already dissolved Christianity in a vat of nitric acid.”

— Lee Strobel (2004), reflective monologue, with citation to Feuerbach, on being sent in 1974 to report on the West Virginia hillbilly bombings and shootings over certain non-Christianity conforming textbooks being used in public schools [4]

Quotes | On
The following are notes of praise, tribute, and or summary:

“The grandfather of Marxian atheism and Freudian atheism is Ludwig Feuerbach, who was first a theologian, then a Hegelian, and finally an atheistic philosopher.”

“It is true: writing brings forth in the lives of many humans just such destructive results, like Ottilie in Goethe’s Elective Affinities, through whose appearance the fortune of a satisfying life is ruined.”

“Whenever morality is based on theology, whenever right is made dependent on divine authority, the most immoral, unjust, infamous things can be justified and established.”

“Antinatural morality is the twin sister of supernatural faith.”

“In the sphere of strictly theoretical philosophy, I attach myself, in direct opposition to the Hegelian philosophy, only to realism, to materialism.”

“It is clear as the sun and evident as the day that there is no god and that there can be none.”

“Whenever morality is based on theology, whenever the right is made dependent on divine authority, the most immoral, unjust, infamous things can be justified and established. Morality is then surrendered to the groundless arbitrariness of religion.”