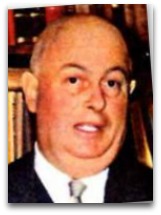 In chnops-thermodynamics, Luigi Fantappie (1901-1956) was an Italian mathematical physicist noted for his 1941 term 'syntropy' (or syntropia in Italian), loosely described as phenomena governed by a force, opposed to entropy, which attracts living systems towards higher levels of organization and order. [1] In the first 2005 article of Italian journal Syntropy (which lasted to 2008), syntropy is defined, in short, as the energy of life. The editor of Syntropy, Italian sociologist Ulisse de Corpo, summarizes the efforts of Fantappie as such: [2]

“Luigi Fantappiè, one of the major Italian mathematicians, while working on quantum mechanics and special relativity, discovered that all physical and chemical phenomena, which are determined by causes placed in the past, are governed by the law of entropy, while all those phenomena which are attracted towards causes which are placed in the future (attractors), are governed by a law which is symmetrical to entropy and which Fantappiè named syntropy.”

Fantappie, somehow, derived his syntropy conception from his work on the creation of anti-particles and how this process relates to the second law of thermodynamics. Fantappie was said to have observed that human consciousness was at the top of the organization ladder of nature, and thus he reasoned that it is intimately associated with the syntropy side of universal movement or process, as contrasted with entropic movements. [3]

German physical science economist Stephen Ternyik believes, to note, that Italian sociologist Ulisse de Corpo has developed a new approach to thermodynamics of human existence that is "well worth studying." [4]