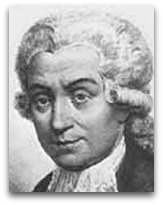 In science, Luigi Galvani (1737-1798) (IQ:175|#270) [RGM:318|1,350+] was an Italian physician-physicist noted for his circa 1771 discovery of the phenomenon of animal reanimation—via electricity, spark or electrochemical circuit contact—of severed frog legs.

In the 1780s Galvani used an electrostatic generator to make frog legs twitch at a distance. [5]

Galvani published his results in the 1791 article Commentary on the Effect of Electricity on Muscular Motion. [1]

Twitching discovery
The actual details, facts, and dates of the famous electrically-induced twitching dead frog legs discovery is a bit inconsistent and varied, to say the least, such as who actually made the discovery, Luigi or his wife Lucia Galvani (1743-1788/90), the date of the discover, and actual electro-material apparatus arrangement of the the legs at the time of the discovery—even citations of the date of her last year differ (1788 or 1790) as well as the date of their marriage (1760 or 1762). [9]

As Scottish chemist and technologist George Wilson reported, in his 1859 history of electricity, “some twenty versions of the story are known on the continent” and that he was already making redactions to previous comments about the discovery he had published. [6] In American physiologist Charles Sherrington’s 1840 Man on His Nature, to cite one example, he states, in regards to the two-millennium long mind-brain-soul-movement debate, from Hippocrates to Kant, that:

“Their death-knell rang when Lucia Galvani told her husband Luigi that the frogs’ legs prepared for the meal seemed alive on the copper wire.”

While it is certainly true that there is a connection between culinary habits, e.g. salting frog legs and movement, the actual discovery seems to have either an arc connecting dissimilar metals, e.g. an iron-copper-frog arc, or an electric generator that released sparks stimulating movement. As to dates, in 1760 or 1762, Luigi married Lucia Galeazzi, the daughter of Italian anatomist and professor of experimental physics Domenico Gusmano Galeazzi (1686–1775), after which at the request of the father he moved in with is in-laws, and during the course of the the next ten years, according to Italian biographer Stephen Spignesi, he performed his most famous frog electricity experiments. [8] As to who actually made the discovery, Wilson, to cite one example, attributes the first viewing of the twitching to Lucia, who as Galvini’s devoted assistant: [6]

“The celebrated frog was dismembered, not for culinary but for scientific purposes, and was awaiting Galvani's return in a part of his laboratory where an electrical machine was at work. Lucia Galvani, who was looking on, was startled by observing that whenever the machine gave out a spark the limbs of the frogs were convulsed, and struggled as if still parts of a living body. She called her husband, who mistook in part the nature of this singular phenomenon.”

The mention of being mistaken seems to be a reference to Luigi's animal electricity theory.

This soon led into a debate with his associate Italian physicist Alessandro Volta, who in 1800 invented the electric pile or battery so to disprove Galvani’s animal electricity theory.

In 1797, or earlier, Goethe, together with Alexander Humboldt and Wilhelm Humboldt, conducted electrical experiments on frog preparations, in testing the subject of galvanism or animal electricity theories of Galvani. [74]

Nature of life
In 1816, Mary Shelley and Percy Shelley visited George Byron in Switzerland, during which time the group discussed galvanism and the feasibility of returning a corpse or assembled body parts to life, and to the experiments of the 18th-century natural philosopher Erasmus Darwin, who was said to have animated dead matter. Mary later recalled: [3]

“Many and long were the conversations between Lord Byron and Shelley to which I was a devout but nearly silent listener. During one of these, various philosophical doctrines were discussed, and among others the nature of the principle of life, and whether there was any probability of it ever being discovered and communicated. They talked of the experiments of Dr. Darwin who preserved a piece of vermicelli in a glass case till by some extraordinary means it began to move with voluntary motion. Not thus, after all, would life be given. Perhaps a corpse would be reanimated; galvanism had given token of such things: perhaps the component parts of a creature might be manufactured, brought together, and endued with vital warmth.”

This seed conversation eventually turned into the famous 1818 novel Frankenstein.

In 1836, a satirical cartoon, entitled “A Galvanized Corpse”, shown adjacent, lampooning the idea of bring someone back to life by galvanism, which shows a dead body (deanimated) being brought back to life (reanimation) via use of Alessandro Volta's electric pile (battery); the summary of which is as follows: [4]

“Jacksonian editor Francis Preston Blair rises from his coffin, revived by a primitive galvanic battery, as two demons look on. A man on the right throws up his hands as he is drawn toward Blair, saying: Had I not been born insensible to fear, now should I be most horribly afraid. Hence! horrible shadow! unreal mockery. Hence! And yet it stays: can it be real. How it grows! How malignity and venom are "blended in cadaverous union" in its countenance! It must surely be a "galvanized corpse." But what do I feel? The thing begins to draw me . . . I can't withstand it. I shall hug it! . . .

First demon: "There! We've lost him, after all! See! they are bringing him to life again!"

Second demon (holding a copy of Blair's newspaper, the "Globe)": Lose him! ha ha! . . . Rest you easy on that score. But can't you see that it's all for our gain that he should be galvanized into activity again? Where have we his equal on earth? especially since dear Amos [Kendall], poor fellow, has got his hands so full, at the Post Office, that he can't write for us as he used to. Show me another man that can lie like him. They talk of Croswell [influential editor of the "Albany Argus" and Van Buren ally Edwin Croswell] but Harry is nothing to him. I doubt if I can beat him myself. Lose him! a good joke that! Weitenkampf tentatively identifies the man at right as Amos Kendall, but the likeness differs considerably from that found in other caricatures of Kendall.”