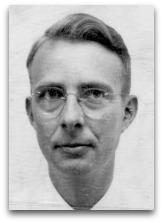 Overview
In 1968, Alvarez wone Nobel Prize in physics for "for his decisive contributions to elementary particle physics, in particular the discovery of a large number of resonance states, made possible through his development of the technique of using hydrogen bubble chamber and data analysis".

In 1980, Alvarez posited his now-famous "asteroid impact extinction theory", aka “Alvarez hypothesis” (Ѻ), co-developed with his son geologist Walter Alvarez, according to which, based on measurements of iridium in a layer of the earth’s crust, the extinction of the dinosaurs 65-million years ago was caused by an asteroid strike (Ѻ)

Other
Alvarez is noted among mislabeled geniuses and IQ tests for having gone on to become a genius despite having failed (Ѻ)(Ѻ) to qualify for Terman’s 1921 IQ study (Ѻ), having had a tested IQ below 135.

Quotes | On
The following are quotes on Alvarez:

“A more valid criticism — and this is crucial to understanding the flaw in Shockley's argument too — lies in what IQ did not measure in Terman's study. Most obviously, Terman missed the two Nobel Laureates. Neither Shockley nor Luis Alvarez had IQs above 135. Shockley was tested twice and missed both times. Whatever talent they had went unmeasured by Terman's questions. One hypothesis is that the tests do not measure mathematical prowess very well, but is that ability not a facet of what we mean by ‘intelligence’?”

“Two of the students Terman deemed to be insufficiently intelligent to participate in his study, Luis Alvarez and William Shockley, won the Nobel Prize in Physics. None of the Termites received a Nobel Prize or a Pulitzer Prize. Nor did any of the Termites become world-class musicians like Isaac Stem and Yehudi Menuhim — two other students rejected by Terman for insufficient IQ scores. ‘All in all’, writes David Shenk, the author of The Genius in All of Us (2010), Terman's epic studies in genius turned out to be studies in disappointment’.”