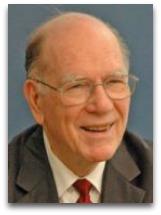 In hmolscience, Lyndon LaRouche (1922-) is an American charlatan, seeming political economist, and cult leader (Ѻ) whose name pops up here and there being that he and many of his followers attempt to blend in scientific concepts, in a distorted way, into their arguments, in support of whatever agenda; one example being his theory of “physical economy”, a type of economic system based on the physical chemistry biospheric concepts of Russian scientist Vladimir Vernadsky, in which the economic system is seen as connective noosphere of minds. [1]

LaRouche, in simple terms, and or anybody connected with his work, is kind of like a Kent Hovind of economics, intermixed with a tinge of L. Ron Hubbard.

Boltzmann-Wiener controversy
LaRouche, supposedly, studied, i.e. read some of the Leibnitz-Clarke correspondence (Ѻ) surrounding, the the Leibniz-Newton controversy as a teenager, in which he read that Gottfried Leibniz had pointed out errors in Isaac Newton’s work, and sometime thereafter came across what he seems to have deemed the Boltzmann-Wiener controversy, i.e. Ludwig Boltzmann’s view of entropy of statistical systems of particles as compared to Norbert Wiener’s negentropy view of “living systems”, such as social systems or economic systems, as LaRouche seems to have taken it. LaRouche, in his 1988 autobiography, put it like this: (Ѻ)

“My understanding of this error of Wiener's is the key to my original discoveries in economic science, and is therefore the key to everything which has made me an influential international figure today.”

Overview
The epitome of LaRouche type of mindset is captured well by Jonathan Tennenbaum in 1993 attempting to disprove or “refute” as he says the first law and second law, of thermodynamics, as fake laws. (Ѻ)

The following 2009 quote by LaRouche, seems to capture his general view of the second law of thermodynamics (a view adopted by many of his followers): [9]

“The presumption concocted by such hoaxsters as Rudolf Clausius, Hermann Grassmann, Lord Kelvin, et al., which is known as the claimed principle of reductionist thermodynamics, the so-called principle of entropy (or, ‘second law’ of thermodynamics), was an ontological fraud from its inception. Clausius and Grassmann claimed to have derived their argument from the work of Lazare Carnot's nephew, Sadi Carnot; but, that report by Grassmann, et al., as defended, gratuitously and maliciously, by the editor of Riemann's own collected works, was also fraudulent methodologically, as that is demonstrated in a study, following the work of Ampere, which was prompted by Carl Gauss, and conducted through proof-of-principle experiments in electrodynamics which were conducted at Göttingen University under the direction of Wilhelm Weber, that with the relevant cooperation of Lejeune Dirichlet, Riemann, and Kohlrausch. The universe is, in fact, anti-entropic, as this is illustrated dramatically by the achievements of Academician V.I. Vernadsky for physical biochemistry.”

Curiously, this entire spiel, which is mostly incorrect (e.g. Grassmann had nothing to do with the second law) is repeated almost verbatim by American mathematician Bruce Director, who says in a video lecture (below), among other things, that: “we know based on our knowledge of science and what Lyndon﻿ has discovered about the science of physical economy that the universe does not conform to what Clausius says”. Director also says that "Clausius was not precise and that he was crazy". LaRouche, supposedly, has given the fullest version of his Vernadsky-based economics in his 2001 book The Economics of the Noosphere, with contents such as the gravity of economic intentions, and the fundamental distinction between living and nonliving bodies, among others. [10]

Negentropy
LaRouche seems to have first started writing about negative entropy in the context of economics in the 1970s. To cite one view, according to the 2003 views German-born Canadian author Rolf Witzsche: [2]

“LaRouche has pioneered the investigation of the [negentropy] principle in relationship the economies of nations, and to life in general.”

LaRouche seems to have been influenced, in his theories on economic “negentropic” processes, by work of American mathematician Norbert Wiener. [3]

Followers
LaRouche seems to have a large following, embodied in the LaRouche Political Action Committee (LPAC), who all use LaRouche's interpretation of the second law and of entropy as what seems to be a platform to argue their political agenda. Some of LaRouche school include: Americans mathematician Bruce Director, economist Michael Kirsch, and Benjamin Deniston, who presents an overview of the anti-entropic development of life arguing that always moving to higher levels of energy-flux-density. [4]

Physical economics
The central argument or basis of their “physical economy” model is that acts of creativity resulting in new technology should be the basis of a type of economic unit of value, measured someway in terms of an increase in “energy-flux density” per region of the economy. The following is an example quote: [8]

“Whenever we introduce the use of those technologies by mankind, the which are of a higher net energy-flux density per capita and per square kilometer, even if the product of that effort is delivered to some place outside our planet Earth, the included effect is to raise the level of productivity, and available standard of living (negentropically), of the population for the present and future inhabitants of Earth itself.”

In commentary on continuing the lithosphere-biosphere-noosphere work of Vernadsky, LaRouche states that: [8]

“It is important, today, to revisit the work of Planck and his friend Wolfgang Koehler from the later vantage-point of Vernadsky's categorical distinction of Noösphere from Biosphere. The categorical distinction of the noëtic cognitive powers specific to the human individual, from the "mentality of apes," acknowledges anti-entropic, biological creativity in the specific as well as varietal advances in animal and plant species, but willful forms of specifically, systemically anti-entropic, human creativity, are uniquely specific to the human individual. In other words, the universe as a whole is pervasively anti-entropic, but only the human individual is specifically capable of exerting anti-entropic changes in the system of nature by means of a conscious, noëtic act of will. The implications for science today, of the relationships among Planck and Koehler, and of Planck with Einstein, and the implications of the convergence of Einstein and Vernadsky are being pursued, in international collaborative efforts, by Sky Shields and others among ‘the basement crew.’”

The assertions about Planck and Einstein having opinions on Vernadsky here, to note, are purely fallacious, as they had no association.

Education
LaRouche graduated from high school in 1940, and made an attempt at college in the following years, without success. In particular, LaRouche enrolled at Northeastern University in Boston, but left in 1942 after receiving poor grades. He wrote of his geometry class that he "could not accept the axioms and postulates," and of his teachers in general that they "lacked the competence to teach me on conditions I was willing to tolerate." In circa 1947, after a several year stint in the US Army as a non-combatant, LaRouche again attempted to resume his education at Northeastern, intending to major in physics, but left because of what he called academic "philistinism."