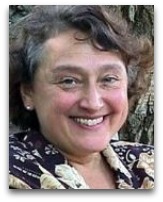 In science, Lynn Margulis (1938-) is an American biologist noted, in animate thermodynamics, for her work, beginning in circa 1973, on the origin of life in relation to thermodynamics, the endosymbiotic hypothesis, and the Gaia hypothesis, the latter of which she worked on in conjunction with James Lovelock.

Life and entropy
It seems that Margulis first began to dabble in thermodynamics with the joint publication with James Lovelock of the 1974 article “Atmospheric Homeostasis and by and for the Biosphere: the Gaia Hypothesis”. In this paper, they attempt to explain life in the context of physical sciences, namely thermodynamics, cybernetics, and information theory. [6] They cite English physicist John Bernal (1951) and Eugene Wigner (1961) with the following view: [7]

“Life is one member of the class of phenomena which are open or continuous reaction systems able to decrease their entropy at the expense of free energy taken from the environment and subsequently rejected in degraded form.”

Lovelock and Sagan then go on to cite the 1969 essergy theory of American engineer Robert Evans to argue that both entropy and free energy can be restated in terms of information. [8]

In her 1995 book What is Life?, co-written with her son Dorion Sagan, in which she attempts to update Erwin Schrodinger’s classic 1944 What is Life?, with the inclusion of newer concepts such Ilya Prigogine’s dissipative structure theory, views such as those of Alan Watts, James Lovelock and his Gaia hypothesis, and her endosymbiotic bacterial fusion / fission origin of life theory and sexual reproduction. In short, she argues on the topic of the origin of life that: [1]

“Some 4,000 million years ago life generated, as a coalescing of oil droplets that increased their order, as matter undertook a different direction, satisfying its autopoietic imperative in a universe obeying the laws of thermodynamics.”

Margulis helped Erich Jantsch develop his view, building on Prigogine, that the entire universe, in which dissipative structures arose, was self-organizing, as explained in his 1980 The Self-Organizing Universe, by explaining to him that gas-exchange microbes were the reason for the atmosphere being in a highly energetic, chemically unlikely state.

Sex
In her followup 1997 book What is Sex?, she expands on her earlier views and on the topic of sex, states that sex in biology is a type of combination reaction, in which one sperm joins with one egg to make one fertilized egg, the logic of which she defines with the following equation: [2]

or in chemical reaction notation:


This oversimplified view, however, is incorrect in that from chemical reaction point of view sex, in which a child is conceived, is a double displacement reaction type of human chemical reaction. Margulis also touches on the second law in many of her other books, such as her 1999 Symbiotic Planet, 2000 Environmental Evolution: Effects on the Origin and Evolution of Life on Planet Earth, and especially so in her 2007 Dazzle Gradually: Reflections on the Nature of Nature. [3]

Other
Margulis is also noted for her effort to bring about the 1998 English translation of Vladimir Vernadsky’s The Biosphere. [4]