In religio-mythology, Manu, the son of Brahma, is the Hinduism rewrite of the Egyptian god Nu (or Nun); equivalent to the Christian person Noah, or Muslim person Nuh.

Buddhism
The Laws of Manu, being one of the earliest systematic accounts of brahmanical law, was an extremely influential text among Indian popular religion, and during its prime period of compilation and amendment, during the years 100BC to 500AD, participated in a gradual, multivalent, and highly negotiated shift toward Buddhist hegemony over spirit-deities. [2]

Creation myth
In 200BC, the so-called “Laws of Manu”, or “Code of Manu” (Nietzsche, 1888), aka Manu Smriti, were penned, wherein, in the opening twenty sentences, shown below, the Hindu version of the Heliopolis creation myth is found, Nun or Nu replaced by Manu, and Ra replaced by Brahma, Atum, Shu, and Tefnut, replaced by an incubating egg, and Geb and Nut replaced by earth and heaven (or sky), in short: [1]

1. The great sages approached Manu [Nun], who was seated with a collected mind, and, having duly worshipped him, spoke as follows:
2. 'Deign, divine one, to declare to us precisely and in due order the sacred laws of each of the (four chief) castes (varna) and of the intermediate ones.
3. 'For thou, O Lord, alone knowest the purport, (i.e.) the rites, and the knowledge of the soul, (taught) in this whole ordinance of the Self-existent (Svayambhu), which is unknowable and unfathomable.'
4. He, whose power is measureless, being thus asked by the high-minded great sages, duly honored them, and answered, 'Listen!'
5. This (universe) existed in the shape of Darkness, unperceived, destitute of distinctive marks, unattainable by reasoning, unknowable, wholly immersed, as it were, in deep sleep.
6. Then the divine Self-existent (Svayambhu, himself) indiscernible, (but) making (all) this, the great elements and the rest, discernible, appeared with irresistible (creative) power, dispelling the darkness.
7. He who can be perceived by the internal organ (alone), who is subtile, indiscernible, and eternal, who contains all created beings and is inconceivable, shone forth of his own (will).
8. He, desiring to produce beings of many kinds from his own body, first with a thought created the waters [Nile river flood], and placed his seed in them.
9. That (seed) became a golden egg [benben stone], in brilliancy equal to the sun; in that (egg) he himself was born as Brahman [Ra], the progenitor of the whole world.
10. The waters are called narah, (for) the waters are, indeed, the offspring of Nara; as they were his first residence (ayana), he thence is named Narayana.
11. From that (first) cause, which is indiscernible, eternal, and both real and unreal, was produced that male (Purusha), who is famed in this world (under the appellation of) Brahman.
12. The divine one resided in that egg during a whole year, then he himself by his thought (alone) divided it into two halves;
13. And out of those two halves he formed heaven [Nut] and earth [Geb], between them the middle sphere, the eight points of the horizon, and the eternal abode of the waters.
14. From himself (atmanah) he also drew forth the mind, which is both real and unreal, likewise from the mind egoism, which possesses the function of self-consciousness (and is) lordly;
15. Moreover, the great one, the soul, and all (products) affected by the three qualities, and, in their order, the five organs which perceive the objects of sensation.
16. But, joining minute particles even of those six, which possess measureless power, with particles of himself, he created all beings.
17. Because those six (kinds of) minute particles, which form the (creator's) frame, enter (a-sri) these (creatures), therefore the wise call his frame sarira, (the body.)
18. That the great elements enter, together with their functions and the mind, through its minute parts the framer of all beings, the imperishable one.
19. But from minute body (-framing) particles of these seven very powerful Purushas springs this (world), the perishable from the imperishable.
20. Among them each succeeding (element) acquires the quality of the preceding one, and whatever place (in the sequence) each of them occupies, even so many qualities it is declared to possess.

Manu's flood
The following is a visual (Ѻ) of the 1300BC version of the flood of Manu: 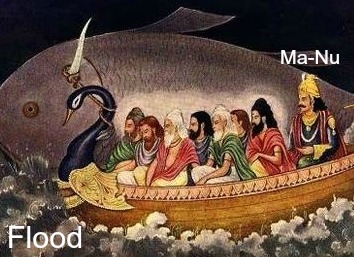 which is the Hindu rewrite of Nu's solar barque, which is found depicted artistically on the pyramids, as well as constructed for various pharaohs, preserved archeologically as “ancient Egyptian solar ships” (Ѻ), aka solar barque myth (Ѻ), bursting out of the annual Nile river flood; which in Christianity is known as Noah's ark or Nuh's ark in Islam.

Nietzsche
In 1888, Friedrich Nietzsche, in his Anti-Christ (§55-57), devotes a certain amount of discussion to a comparison of the Code of Manu to the Bible in respect to a comparison of general "code of laws" books, citing the former as being more respectable to woman.