In religio-mythology, Maat, the female counterpart of the god Thoth, was []

Overview
In 1904, Maat, according to Wallis Budge, was characterized as the goddess representative of the personification of the conceptions of "rectitude, straightness, law, order, and unfailing regularity". [1]

In 2002, Richard Gabriel defined Maat in respect to the notion of “moral order” as follows: [2]

“But in the ethical and or philosophical sense Maat means much more than to do what is right. Maat means also the just order established by god in nature and society through the act of creation. It is the dynamic order that is behind all creation, an order man must strive to preserve by conducting himself properly toward god, his fellow men, and all things, even animals. For the Egyptian all life was of a single piece governed by the same moral law. This idea is close to the medieval notion of a natural moral order that is the material expression of the divine order in which human law and human action are participants in and reflections of the larger order of the universe. In the Egyptian view, however, unlike the later Aristotelian concept, this cosmic order does not govern itself nor is it governed by some unmoved mover. When men do evil, they bring disorder to the natural order of things. Accordingly, it is man's responsibility to preserve and restore the natural order by doing what is right, that is, Maat.” 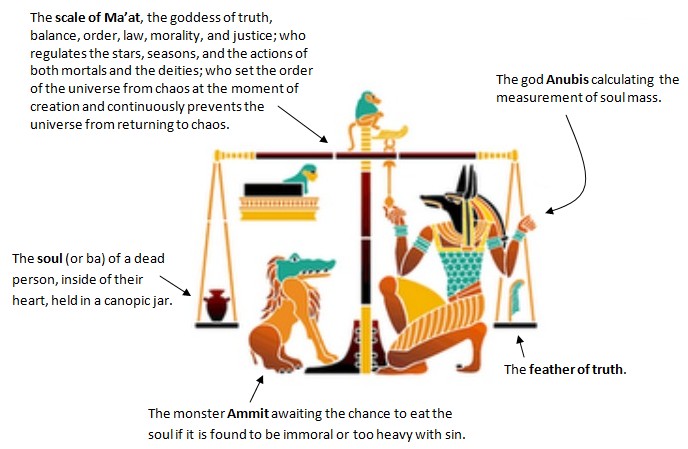 Shown above, is a depiction of the "scale of Maat", i.e. Maat's scale, which, in Egyptian religion, was thought to weigh, in the "afterlife", the weight of the sins of one's wrong doings, done in "life", against the "feather of truth".

Creation
Maat, according to Wallis Budge (1904), was considered to be the definer at creation of the course followed by Ra in his journey through the sky, each day. [1]

Scale of Maat
In 2500BC, the so-called “scale of Maat” was the conceptual device on which souls in the afterlife were weighted, against the feather of truth, to measure thee sum wrongfulness or sinfulness of the deceased person.