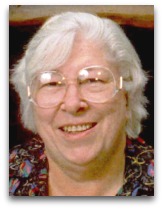 In existographies, Madalyn Murray O’Hair (1919-1995) (FA:115) was an American free thinker and "avowed atheist" noted for getting the Supreme Court in 1963 to officially end mandatory Bible-reading in American public schools; for starting American Atheists, now run by David Silverman, and for publications, such as Why I’m an Atheist: Including a History of Materialism (1980).

Overview
In 1960, O’Hair, after moving to Baltimore, Maryland, filed suit against the city school system that year, claiming her son’s constitutional rights were being violated by requiring him to participate in bible readings at school. (Ѻ)

William Murray
In 1960, William J. Murray III (1946-) (Ѻ), son of the O’Hair, commented on camera how he was an atheist and proud to be one and didn’t want to read the Bible in public school; in a later period interview (Ѻ), William Murray explained how he went from a “Marxist atheist” to a “libertarian atheist”, a dog eat dog sort of view, that personal success is the main thing to do, to becoming a Christian believer in late adulthood, becoming a Baptist minister.

In 2013, on the 50th anniversary of American Atheists, Aron Nelson gave a speech (Ѻ) on O’Hair and her “most hated woman in America” epitaph.

Quotes | By
The following are quotes by O’Hair:

“The ‘virgin’ Mary should get a posthumous medal for telling the biggest goddamn lie that was ever told. Anybody who believes that will believe the moon is made out of green cheese.”

“One of the things I am most proud of is that people can say ‘I’m an atheist’, in the United States, without being called a Communist atheist, or an atheist Communist. I separate the two words. I think that’s probably the best thing that I did.”

— Madalyn O’Hair (1989), response to interviewer who asked her what she was proudest of having accomplished [2]

“I’m an ‘atheist’ – not an agnostic, nor a rationalist, nor a realist, nor a secularist, nor a humanist, nor any other fancy name behind which people must hide in our society in order to be safe in our society. And isn’t it an indictment in our society that we who do not believe—we nonbelievers of all stripes—must hide behind certain names since reprisals and sanctions would be pout into effect against us if we said what we really believe.”

Further reading
● O’Hair, Madalyn. (1980). Why I’m an Atheist: Including a History of Materialism. Publisher.