Overview
In 2003, "MailCube" concept, in the draft note idea stage, was conceived in by American electrochemical engineer Libb Thims, while in the process of drafting a three-volume treatise on "human thermodynamics" (see: Thims publications), itself dependent upon large scale book ordering, for research purposes, as a result of which frequent book ordering theft—up to seven or eight books stolen on one incident—became problematically, during the course of ordering some 945 books, from Amazon, from 2002 to 2015 (see: book orders).

In 2011, Prototypes began to be built and field-tested. During this period, friends and neighbors began to ask Thims to build and install MailCubes at their house. Thims, however, was still too heavily involved in research and writing; as a result of which the MailCube company realization sat on the back-burner (see: thermal word).

In 2016, after the completion of the publication of the 10-volume print set of Hmolpedia (see: progress report), Thims began to focus on the growth of MailCubes as a company.

On 25 Apr 2016, Thims conceived the "two birds with one stone" idea that part of the proceeds from MailCubes will go towards the establishment, in America (e.g. Princeton) or Europe (e.g. Oxford), of the world's first Nightingale Chair of Social Physics, at yet to be named university, similar to the way the Rockefeller Foundation, in the 1950s, funded the Princeton Social Physics Project, or the way Ernst Solvay, from 1894 to 1910, using proceeds from his Solvay process (1861) invention, funded global social energetics conferences and education and, in France, established the Institute of Social Sciences.

“I think the [following] needs doing: [we need] a scheme from someone of high authority as to what should be the work and subjects in teaching ‘social physics’ and their practical application, in the event of our being able to obtain a statistical professorship or readership at the University of Oxford.” 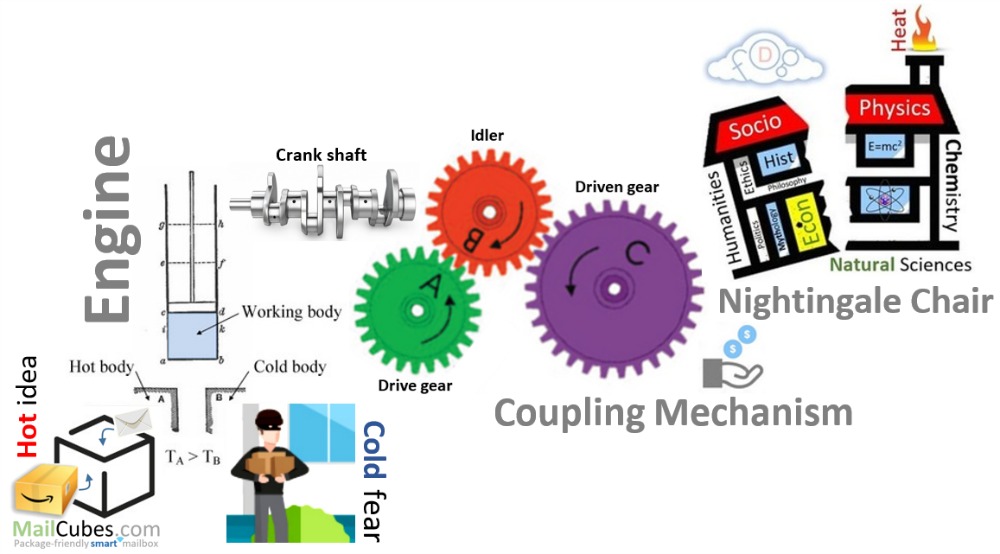 The base cost of the proposed American Nightingale Chair, as evidenced by the 2016 funded inception of the Appignani Chair of Atheism, at the University of Miami, is $2.2 million.

MailCubes | Financial structure
The following is a draft structural outline of division of proceeds:

“He who is firm in will moulds the world to himself.”

“A ‘smart mailbox’ is not something seen very often, but it’s only a matter of time until it’s the latest trend in smart home technology.”

“Ain't no delivery man in the US that's gonna go through all this to deliver a package.﻿”

“A MailCube is like a home PO Box; a kiosk-like ‘cubical’ for your home’s delivery interactions.”

“That’s a really cool idea. Anything that makes our job easier. I hate those ‘slots’ and having to jam everything in.”

— Mail carrier (2017), comment to Libb Thims, by anon 5’7” mail man, amid showing 6-inch rail, vertical drop, MailCube model design, and asking about idea installation height (him saying that his eye-level was about ideal, for most carriers), 10:30AM CST Jun 20