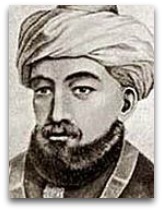 Overview
In c.1190, Maimonides, in his The Guide of the Perplexed, dismisses atomic theory based atheism as follows:

“As for those who do not recognize the existence of god, but who believed that things are born and perish through aggregation and separation, according to chance, and that there is no being that rules and organizes the universe—I refer here to Epicurus, his sect and the likes of him, as told by Alexander—it serves no purpose for us to speak about those sects; since god’s existence has been established, and it would be useless to mention the opinions of individuals whose consciousness constructed their system on a basis that has already been overthrown by proofs.”

An alternative translation, with "chance" replaced by "accident", reads as follows: [3]

“There are those who do not recognize the existence of god, but instead believe that the existing state of things is the result of accidental combinations and separation of the elements, and that the universe has no ruler or governor. These people are Epicurus and his school, and similar philosophers.”

Maimonides, in overview, refers to the earlier atomic views of Epicurus and gives commentary on the doctrine of the Mutakallemim (scholars of kalam), the first principle of which is that “the universe, that is, everything contained in it, is composed of very small parts [atoms] which are indivisible on account of their smallness; such an atom has no magnitude; but when several atoms combine, the sum has a magnitude, and thus forms a body”; the second proposition of which is that the universe is a vacuum in which the atoms are found; the third proposition arguing that time is composed of 'time-atoms'. [2]

Joshua 10:13
In c.1180, Maimonides asserted his patch opinion that events described in Joshua 10:13 occurred because of “extended local daylight”, without there having been any change in the movement of the heavenly spheres. [4]

Quotes | By
The following are quotes by Maimonides:

“If the earth is thus no bigger than a point relative to the sphere of the fixed stars, what must be the ratio of the human species to the created universe as a whole? And how then can any of think that these things exist for his sake, and that they are meant to serve his uses?”

“Teach thy tongue to say I do not know, and thou shalt progress.”