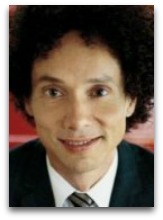 In hmolscience, Malcolm Gladwell (1963-) is an English-born Canadian writer noted for his 1996 to present publications on laymanized social physics, his 2000 The Tipping Point, in particular, being his most famous work.

In 2000, Gladwell expanded on his article into the book The Tipping Point, which introduced Mark Granovetter, Robin Dunbar, six degrees of separation, connectors, etc., style social physics like theory to the lay public, and therein became Amazon's best-selling book of the 2000s, owing to his fun presentation method of laymanizing classic sociological, epidemiological, and human physics type studies into a easy to read style for digestible for the general public.

In his work, he popularizes and discusses topics such as the Dunbar number; the idea of social ‘tipping points’; the components of social networks, i.e. people acting as connectors, mavens, or salesman; American neuroscientist William Condon’s 1960s studies of ‘cultural microrhythms’ or human micromovements, i.e. the rhythms of human interactions when studied at the 1/45th of a second frame-by-frame scale, the psychology of stickiness factors in relations to attention spans.

In 2005, Gladwell published the followup book Blink, one of the focal points of the book been the marriage stability measurements of American mathematical psychologist John Gottman. [2]

In 2008, Gladwell, in his Outliers digs into the mechanics of genius development, wherein he finds that scientific geniuses, sports stars, musical greats, and billionaire entrepreneurs all have the common factor of 10,000 project input hours. [3]

Education
Gladwell was 11 he would frequently wander around the offices at the University of Waterloo where his father was professor emeritus of mathematics, which is said to have stoked his interest in reading and libraries. [4] In 1984, Gladwell completed a BA in history at the University of Toronto, after which he spent the next decade or so working as a journalist for various publications covering a mixture of science, business, and fashion.

In 1996, Gladwell started at The New Yorker with the desire to "mine current academic research for insights, theories, direction, or inspiration." Gladwell gained popularity with two New Yorker articles, both written in 1996: "The Tipping Point", on epidemic tipping points, and "The Coolhunt", and the science of studying what is cool. These two pieces would become the basis for Gladwell's first book, The Tipping Point, for which he received a $1 million advance. When asked for the process behind his writing, he said "I have two parallel things I'm interested in. One is, I'm interested in collecting interesting stories, and the other is I'm interested in collecting interesting research. What I'm looking for is cases where they overlap." [5]