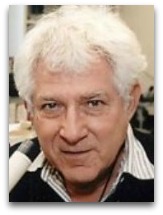 In cellular thermodynamics, Malcolm S. Steinberg (c.1930-) is an American cellular pathologist noted for his 1964 cell adhesion theory or differential adhesion hypothesis, sometimes referred to as the “Steinberg model” or “thermodynamic hypothesis” (although this term is also used to refer to 1950s protein folding theories of Christian Anfinsen), a model that explains patterns of cell sorting based on thermodynamics principles. [1]

Overview
In the 1960s and 1970s, in his laboratory, Steinberg hypothesized that mixed type aggregates of cells segregate into several homogeneous structures analogous to phase separation of immiscible liquids, such as oil and water, as famously noted by Empedocles, that do not form a homogeneous mixture, but instead separate to prefer adhesion with “like” elements.

Steinberg’s 1963 article “Reconstruction of Tissues by Dissociated Cells” cites the earlier 1939 tissue affinity theory of German-born American embryologist Johannes Holtfreter who, together with his student P.L. Townes, who suggested that “the directional migration of the cells as well as the elective affinities (forerunner to free energies) of cells ruled the organization of these recombinates and of the normal embryo’s germ layers”. [3]

Steinberg and his associate D.R. Garrod showed that co-cultured chick embryonic liver and limb bud mesoblast cells actively “sorted-out” such that liver cells were grouped together in islands surrounded by limb bud cells. They then hypothesized that the more cohesive cell type, i.e. those that prefer cell-cell adhesions, remains in the middle while less cohesive cell type, i.e. those that instead prefer cell-matrix adhesions, distributes on the outside.

From these observations, Steinberg developed a thermodynamics-based hypothesis that described cell sorting as a phenomenon that minimizes the free energy of the system based on intercellular adhesivity and surface tension. This “differential adhesion hypothesis”, as it has come to be called, is said to have set the stage for the conceptual framework for understanding cell sorting and tissue assembly by force-driven mechanism. [2]

Education
Steinberg completed his BS at Amherst College in 1952, his PhD in zoology at the University of Minnesota in 1956, was a professor of biology at Johns Hopkins University from 1958 to 1966, and transferred to Princeton University in 1966, becoming professor emeritus in 2005. [4]