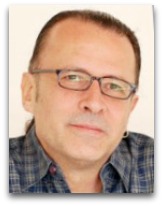 In hmolscience, Manuel De Landa (1952-) is a Mexican-born American philosopher noted, in philosophical thermodynamics, for his 2002 ideas on thermodynamics conceptualized “intensive” and “extensive” sociological properties.

Overview
In 2002, De Landa, in his Intensive Science and Virtual Philosophy, used the thermodynamic concepts of “intensive” and “extensive” properties, as described by Gordon van Wylen’s 1963 textbook, modeled on molecular systems, but applied to biological populations (and by implication social populations), along with Belgian chemist Ilya Prigogine’s conceptions of attractors and bifurcations, to address various philosophical questions. [1] De Landa seems to argue that it is differences in intensive variables that drive or produce change in populations.

In general, the overarching aim of the book, according to de Landa, is to present or rather reconstruct the work of French philosopher Gilles Deleuze, particularly his concept to multiplicities, being that which specifies the structure of spaces of possibilities, to analytical philosophers of science. Specifically, de Landa’s aim is to reinterpret Deleuze’s view of what constitutes the essence of an object, or rather what gives an object an identity preserved through time, in terms of dynamical processes, particularly material and energetic processes. The loose idea is that spaces, quantified by the mathematical conception of multiplicities, explain the regularities exhibited by morpho-genetic processes. De Landa also cites the theories of American biochemist Stuart Kauffman to a good extent.

In 2009, Landa's lectured at the European Graduate School in Saas-Fee, Switzerland, on the philosophical implications of 'materialism', the view that the world is described by material processes that exist independent of the mind, as can be described by thermodynamics, applied to the social realm [2]