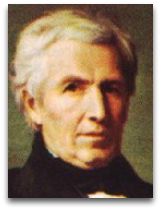 In existographies, Marc Seguin (1786-1875) (CR:5) was French engineer noted for having made some of the first statements on the conservation of energy and on correlations between heat and work.

Overview
In 1822, Seguin, in his letter “Observations on the Effects of Heat and Motion”, expressed views on the conservation of vis viva. [2]

In 1839, owing to his studies of the steam engine, Seguin concluded that heat and work were interconvertable and was said to have estimated the mechanical equivalent of heat. [3]

Quotes | On
The following are quotes on Seguin:

“Kirchhoff’s predecessors in the field of radiation bore him much the same relation as, in the conservation of energy, Mayer, Colding, and Seguin bore to Joule and Thomson.”