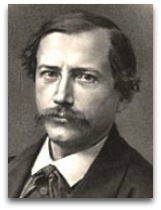 In existographies, Marcellin Berthelot (1827-1907) (IQ:#|#) (GCE:#) (CR:45) was a French chemist noted for his effort to debunk the vital force theory, for his synthesis theories, for work in introducing terms in thermochemistry, and his thermal theory of affinity, and for his maximum work principle, the latter two of which ultimately superseded by the thermodynamic theory of affinity, but important stepping stones, none the less.

Vital force
Berthelot has been described as the official executioner of the vital force theory (see: vitalism), a concept about which he had an expressly philosophical bias against: [5]

“It is the object of these researchers to do away with life as an explanation, wherever organic chemistry is concerned.”

His aim here, although this seems to have have a feel of the defunct theory of life in it, according to chemistry historian Forris Moore (1918), was to show that all the transformations of the organic world are due to the play of simple chemical and mechanical forces acting in a mechanical way. [6]

Thermochemistry
Berthelot was a founder of thermochemistry and coined the terms exothermic and endothermic to describe whether heat leaves or is absorbed by a reaction. [4]

Thermal theory of affinity
In 1864, Berthelot published his theory, similar Danish chemist Julius Thomsen, which has since been dubbed the thermal theory of affinity, that the heat of a reaction was the true measure of affinity (Berthelot-Thomsen principle) and for his 1875 principle of maximum work, both of which were later shown to be incorrect with the development of the science of chemical thermodynamics in the 1880s. [1] The following comment by English chemist Arthur Lamb, translator of the works of German chemist Fritz Haber, on the merit of Haber’s 1907 Thermodynamics of Technical Gas phase Reactions, highlights the view of Berthelot: [2]

“The most important contribution [Haber (1907)] to the subject of predicting the course of a chemical reaction from a few characteristic constants (after the ill-starred attempt of Berthelot).”

In addition to Haber, a number of thermodynamicists, such as Hermann Helmholtz, Walther Nernst, Theophile de Donder, Gilbert Lewis, among others, went to great lengths to disprove Berthelot’s theory, some even wining the Nobel Prize for their efforts.

Into the 1870s, the identification of “affinity” or “work” (or maximum work) with the heat alone, according to Berthelot, was to prove erroneous, in that the newly defined quantity entropy (1865) was also a factor. Berthelot's heat theory of affinity was initially criticized by French physicist Pierre Duhem, in a thesis that Berthelot’s colleagues rejected. [3]

Berthelot’s principle of maximum work, however, eventually met its demise with the publication of Helmholtz’ 1882 paper “The Thermodynamics of Chemical Operations”, in which he proved that the affinity is measured not by the heat evolved in a chemical reaction (in a galvanic battery) but by the maximum work produced when the reaction is carried out reversibly. One must distinguish, according to Helmholtz, between that part of energy which appears only as heat and that part which can be freely converted into other kinds of work, i.e. the “free energy” analogous to potential energy in mechanics. Subsequently, the conditions of chemical stability are not determined by heat production but by the production of a decrease in free energy. [3]

“Organic nature, as well as mineral nature, operates like human industry, by which I mean that it harmonizes irreconcilable effects in absolute geometry. These approximate arrangements yield different degrees and multiple solutions in series of crystals as well as in the series of living beings. This is also the necessary rule for human societies.”