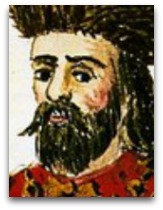 In existographies, Marco Polo (1254-1324) (IQ:155|#627) (Cattell 1000:127) [RGM:147|1,500+] (Gottlieb 1000:66) was an Italian merchant, explorer, and writer, who, just as the Greek Heraclitus did with his visits to the Egyptians and surrounding foreign lands, traveled to the Islamic and Asian countries, and reported back to the Western world, information about various stories, tales, and cultural natures.

Sabah | Assassins
In c.1300, Polo, in one of his reports, recounted how Hasan Sabah (c.1050-1124) (IQ:#|#) (Ѻ) constructed a lush garden, between two mountains, filling it with the most beautiful women in the land, along with the best food and drink, and used as a sort of Skinner box (see: Burrhus Skinner), to “condition” men to, when assigned, to “kill” certain key people; Polo reported on this as follows:

“Sabah would introduce his designated assassins into his garden, some four or six or ten at a time, having first made them drink a certain potion, which cast them into deep sleep, and then causing them to be lifted and carried in. So, when they awoke, they found themselves in the garden, a place so charming they believe that it was [Islamic] paradise in truth, and the beautiful voluptuous maidens dallied with them to their heart’s content, so thy had what all men most desire above all else.”

Sabah’s Skinner box magical garden is the origin of the term “assassins”, from the Persian “Ḥashashiyan” (Ѻ), the name of the sect Sabah established. [1]

References
1. Scott, George P. (1985). Atoms of the Living Flame: an Odyssey into Ethics and the Physical Chemistry of Free Will (pgs. 136-37). University Press of America.