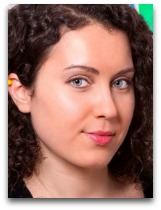 In existographies, Maria Popova (1984-) (CR:4) is a Bulgarian-born American writer, and book reviewer, who writes standing up (Ѻ), noted for []

Education
Popova, born to mother who studied library science, a father who studied engineering, and a grandmother who read encyclopedias to her as a child, supposedly, was exposed to a larger than average amount of knowledge as a youth; in 2007, Popova completed a degree in communications at the University of Pennsylvania.

In 2008, Popova started the blog BrainPickings.org (Ѻ), which initially just blogged about random music, art and books, but by c.2014 had progressed to become a more intellectually focused blog on famous historical people, their books, and their doings; many essays often on top 1000 geniuses, or related; similar, thematically and stylistically, in writing style and topic, to Philip Ball and Malcolm Gladwell.

Quotes | Employed
The following are quotes employed by Popova:

“Nothing is sweeter than to know everything, and enthusiasm for all good arts brings, some time or other, excellent rewards.”


“A sight, and emotion, creates this ‘wave in the mind’, long before it makes words to fit it.”

Quotes | By
The following are quotes by Popova:

“Boredom appears to be the polar opposite of what Mihaly Csikszentmihalyi has famously termed ‘flow’, a state of intense focus you enter whilst absorbed in an enthralling task, when you lose track of time.”