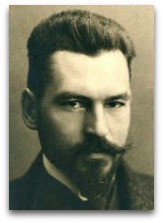 In thermodynamics, Marian Smoluchowski (1872-1917) was an Austrian-born Polish statistical physicist whose work tended to focus on kinetic theory of matter, and who is noted for giving, supposedly, the first ‘exorcism’ of Maxwell’s demon in his 1912 lecture entitled “Experimentally Verifiable Molecular Phenomena that Contradicts Ordinary Thermodynamics”, arguing that thermal fluctuations would prevent any automatic device from operating successfully as a Maxwell demon. [1] In other words, because of Brownian movement, the door would heat up and begin to vibrate, from the gas molecules colliding against it, and would cease to work as a one-way valve. [2] In 1914, Smoluchowski, in his “Limits on the Validity of the Second Law of Thermodynamics”, commented: [3]

“As far as we know today, there is no automatic, permanently effective perpetual motion machine, in spite of the molecular fluctuations, by such a device might, perhaps, function regularly if it were appropriately operated by intelligent beings.”

This passage was cited as cited by Hungarian-born American physicist Leo Szilard in his 1929 followup work on Maxwell's demon. [4]

Trapdoor mechanical demon
The following is a reconstruction of Smoluchowski's so-called "trap door" conception of mechanical Maxwell's demon, based on his 1912 “Experimentally Demonstrable Molecular Phenomena, Which Contradict Standard Thermodynamics”, wherein he discussed “fluctuations” or special states of matter where spontaneous deviations from the average value of some property (e.g. pressure or density) suddenly become very large, such as occurs in phase transformations, and on this platform asked if could be possible to use these pressure fluctuations to push a one-way door, such that a high pressure would open the trapdoor, low pressure would keep the door closed, and as such the door would act like an automated Maxwell demon: [5]

Thus, in principle, if the right sized door, in proportion to fluctuation magnitude, were used, particles could be worked to go from the right to left, and create a temperature difference without work, in violation of the second law, but the Brownian fluctuation motion would vibrate the door, and hence negate the former argument.

Smoluchowski dismissed the idea that an actual violation of the second law could occur, except in the rare case if one were willing to wait long enough, pointing out that if the door were too weak, it would be subject to thermal motion and begin to vibrate randomly, negating the violation ability possibility.

Education
Smoluchowski studied physics under, among others, Josef Stefan in Vienna.