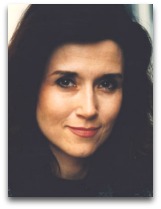 In existographies, Marilyn Savant (1946-) (IIQ:228|#21) (CR:13) is an American magazine columnist noted for her 1985 fiasco wherein she turned an age 11 tested Stanford-Binet report card into an age 40 feigned IQ of 228, which she sold to the Guinness Book of World records (see: Guinness Book IQ) so to promote herself in aims to land a magazine columnist writing job; the resulting fiasco, combined with her good looks (which, to note, thus affronts Beckhap's law), resulted to push her name, mistakenly, into the "highest IQ ever" folklore; a confusion that persists to this day.

Intelligence | Inherited?
In c.1985, Savant, who likes to claim linage from Ernst Mach, on the Joe Franklyn show, stated her view that “intelligence is inherited” and that “it has to be inherited”. (Ѻ) This so-called “Galton intelligence model”, as was promoted by Francis Galton (Hereditary Genius, 1869), naturally enough, is incorrect. Studies of genius (e.g. bachelorhood and genius) show that the more of a genius a genius becomes, e.g. as gauged by ranking on the top 500 geniuses scale, the less likely the genius is to reproduce; moreover the less likely are their offspring to reproduce (e.g. Goethe genealogy). The inherited intelligence model, in fact, was an idea ridiculed by Charles Darwin:

“You have made a convert of an opponent in one sense [of your Hereditary Genius], for I have always maintained that, excepting fools, men did not differ much in intellect, only in zeal and hard work.”

Savant, as we see, is intellectually inept, in this regard.

IQ scam | Overview
In 1947, Savant, aged 11-years and 4-months, or a "just after ten", as she later said on Letterman Show (1985) (Ѻ), took the Stanford-Binet intelligence test, example questions of which shown adjacent.

In 1982, Ronald Hoeflin, unsatisfied with 1942 formed Mensa Society (IQ:132+), created a new high IQ society called Mega Society, conceptualized as a society for supposed geniuses, whose IQs are tested at 145+, and test, called the "Mega Test" (see: Mega Test IQ) designed to recognized IQs of 145 or above. Savant, shortly thereafter, became a member of Hoeflin’s Mega Society (Hoeflin claims to have dated Savant) as did American lawyer Andrew Egendorf (Ѻ).

In c.1984, Egendorf, who was attempting to write a book about high-IQ societies, suggested to Savant, over dinner, that they have Hoeflin send in her Stanford-Binet test scores, from 30 years ago, into the Guinness Book, to get her name listed in the “highest IQ” category. The formula they used to calculate Savant's claimed IQ is the ratio IQ formula (aka Terman IQ), or the ratio of the "mental age" (intellectual age) by the "chronological age" (actual age) of the test taker; specifically:

In respect to "mental ages", in this formula, we note:

“Beyond age fifteen, the ‘mental ages’ are entirely artificial and are to be thought of as simply numerical scores.”

A retrospect commentary on how Egendorf and Savant, did this calculation is as follows:

“Savant – the surname is real, it was her mother’s maiden name – has had a unique claim to fame since the mid-1980s. It was then, almost 30 years after she took a test as a schoolgirl in downtown St Louis, Missouri, that her IQ came to light. In 1985, Guinness World Records accepted that she had answered every question correctly on an adult Stanford-Binet IQ test at the age of just 10, a result that gave her a corresponding mental age of 22 years and 11 months, and an unearthly IQ of 228.”

Savant, Egendorf, and Hoeflin, in short, put the mental age of "22 years and 11 months", however this may have been discerned, and in spite of the post age 15 artificial IQ warning note, and chronological age of "10 years" into the ratio IQ formula to yield:

which calculates an IQ of 229.2 (or 230 rounded off). In short, because Savant, at age 11, knew the difference between "character and reputation" and could "point her right had northward" she could use the ignore-the-fine-print version of the Terman IQ formula to tell people that she has an IQ of 230. Not only that, at age 40, her IQ is still is 230 and is the smartest person ever? This is what is called an overt mischievous feigned IQ.

In Mar 1985, Savant appeared on the Letterman Show, being touted as a person with an “IQ of 230, the highest ever recorded”, during which time she says the following, when queried with "how do we know you are the smartest person in the world: (Ѻ)

“How do you know I’m the smartest women in the world? Nobody really knows that. Not that many people have taken an IQ test. I had the highest score on the Binet, so far. A very small minority of people in the world have taken test and what does Binet know, for heaven’s sake? I mean, back in 1904, he didn’t stumble over a Rosetta stone. He said: ‘this is what I’m going to do’ and everybody has been imitating him ever since.”

Savant, in short, sent in age-fudged IQ test records, test taken at age 10 (actual age 11-years 4-months), using the Lewis Terman's age ratio IQ formula, into the Guinness Book company so to thereby get her name listed in the “highest IQ” category with a Guinness Book IQ of 228 (see: feigned IQ); the stunt was done, as she recounts, for promotional purposes, so to land a job as a magazine columnist.

Quotes | On
The following are quotes on Savant:

“Both the month that Marilyn took the test and the mental age she achieved on it are matters of some question that contribute to the murkiness over the Guinness top score. Her record with the St. Louis board of education shows she took the test in March 1957; she insists she first took it in September 1956. She says documents supporting her claims were provided by a teacher whose name she can’t remember and sent to Christopher Harding, a Mega society member, now in Australia.”

“Savant was given an old version of the Stanford-Binet (Terman & Merrill 1937), which did, indeed, use the antiquated formula of MA/CA × 100. But in the test manual's norms, the Binet does not permit IQs to rise above 170 at any age, child or adult. And the authors of the old Binet stated: 'Beyond fifteen the mental ages are entirely artificial and are to be thought of as simply numerical scores.' (Terman & Merrill 1937). The psychologist who came up with an IQ of 228 (see: IQ:225+) committed an extrapolation of a misconception, thereby violating almost every rule imaginable concerning the meaning of IQs.”

“And what is it that makes Marilyn vos Savant so uniquely qualified to answer such questions? There is only one reason: she is listed in the Guinness Book of World Records as having the ‘highest IQ’ score ever recorded. Never mind that this record is based on a non-standardized test put out by an obscure group known as Mega, supposedly the world's most selective organization of geniuses. Ignore the fact that test scores at the extreme ends of any distribution are notoriously unreliable. Forget that vos Savant graduated 178th out of her class of 613 in high school, married young, failed to finish college, and by her own report reads very little. Her fame came, in the words of journalist Julie Baumgold [1989], ‘only because of the glory of that number.’ If vos Savant has ‘the highest IQ ever recorded’, surely she must be an expert on everything under the sun?’.”

“I think Feynman, Wittgenstein, Austin, and Keynes should be on the list. They achieved so much more than an IQ-only phony like Marilyn vos Savant. I’m suspicious of those who only do stunts to show off memory and math. Let them invent a Microsoft or Apple like Gates or Jobs did, if they want to prove themselves to the world.”