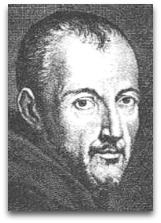 In 1625, Mersenne, in his Verite des Sciences, presented a dialogue, wherein Christian philosopher, a sceptic, and an alchemist discus the a proposal to open an alchemical college; this was said to be thematic in tone in style to Robert Boyle’s later Sceptical Chymist. [4]

Quotes | On
The following are quotes on Mersenne:

“As to the history of the quicksilver experiment [Torricelli vacuum], your reverence may know that the many wells of Florence which are cleaned out every year by means of siphons ‘by attraction’, gave signor Galileo occasion to observe the height of such attraction, which was always the same about 18 ells in that Tuscan measure; and so in every siphon or cylinder (as we like to say) however wide or narrow. From this had their origin his speculations about that matter, which were pout into his work on the resistance of solids. Afterwards, signor Gaspar Berti, here in Rome, made a led siphon which rose to about 22 ells from his courtyard to a room.”

“If we take the mathematics, and those mixed sciences to which they are applicable, it will be universally admitted that their most successful cultivators in France during the seventeenth century were Descartes, Pascal, Fermat, Gassendi, and Mersenne. Fermat, among these, was one of the most profound thinkers of the seventeenth century, particularly as a geometrician, in which respect he was second only to Descartes. The most important steps are those concerning the geometry of infinites, applied to the ordinates and tangents of curves; which he completed in or before 1636.”

“The center of interest in the vacuum questions in 1645 to 1651 was France, where Mersenne reported on the Italian work, and where natural philosophers such as Pascal, Petit, Roberval, and Pecquet all gave their views and experimented with the Torricellian apparatus.”

Quotes | By
The following are quotes by Mersenne:

“To us his incredible genius seems almost miraculous.”

Further reading
● Mersenne, Marin. (c.1640). The Impiety of Deists, Atheists, and Libertines of These Times. Publisher.