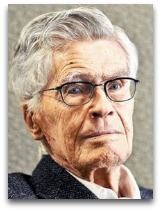 In hmolscience, Mario Bunge (1919-) (CR:5) (DN:7) is an Argentina-born Canadian mathematical physicist and philosopher noted for []

Overview
In 1979, Bunge, as cited (Ѻ) by Alicia Juarrero (1985), supposedly, was promoting some type of emergent properties and or holism theory. [1]

Atheism | Religion
Bunge is categorized as an “atheist philosopher” (Ѻ) and or an “atheist, who combats religion” with “deep liberal convictions, especially in the form of an impassioned defense of the technical value of liberty of thought and search”. (Ѻ)

“Our comparative ignorance of the laws of society and history is due not only to the great complexity of human affairs, but also to the very prejudice that there ‘are’ no laws of history—a prejudice suspect of being allied to powerful social (or antisocial) interests that are vitally interested in preventing deep insights into the social mechanism. Et pour cause! People who are able to take the social mechanism apart in theory may wish to change it in practice, and—what is more dangerous for those who live on the persistence of fossil social forms—such men may even succeed in their attempt. This is essentially why the pragmatic view of science, summarized in the positivistic maxim: ‘to know is to foresee [predict]; to foresee is to control’, which enjoys such wide acceptance in connection with the science of nature, is so often forgotten in the sphere of the social sciences, where it is found more desirable to hold that human society is rationally unknowable, hence unpredictable, hence incurable.”

“Spinoza’s equation ‘god = nature’ is self-contradictory, and must be seen as a subterfuge. After all, Spinoza’s motto was ‘be prudent’. Consequently, the vulgar characterization of Spinoza as a pantheist is incorrect: he was a secret atheist because he was a naturalist. The same holds for Einstein, who once declared that his religion was Spinoza’s, i.e. none.”

“Mach crowed that he had slain the ‘stuff and force’ dragon of the mechanistic materialism of Buchner, Vogt (Ѻ), and Moleschott. Mach, in short, confused the laws with definitions, and inverted the correct logical relation ‘dynamics entails kinematics.’ He thus sacrificed Newtonian mechanics on the idealist altar.”