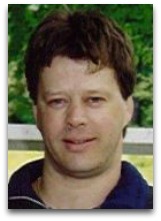 In social physics, Mark Buchanan (1961-) (CR:37) is an American-born English physicist noted for his 2000 book Ubiquity, in which he extends on the critical state sandpile work of Danish physicist Per Bak to elaborate on physics-based theories applied to humanity such as 'chain reactions, 'power laws', the buildup of 'global stress', and 'critical states', etc., apply to bulk social phenomena, such as catastrophes, world wars, mass extinctions. [1] Buchanan later summarized this perspective in his 2007 book The Social Atom.

Buchanan’s latest effort, which he began to roll out in 2011, is a blog entitled “The Physics of Finance: a Look at Economics and Finance through the lens of Physics”. [4]

Pentland | Social physics
In the mid 1990s, while a Nature editor, Buchanan noticed that a large percentage of the papers landing on his desk were attempting to do social science along the lines of physics. This launched him into the study of social physics.

The recent work of American computational social scientist Alex Pentland, namely: Honest Signals: How They Shape Our World (2008) and Social Physics: How Good Ideas Spread, the Lessons from a New Science, champions his proposal of using "sociometers", that quantify vocal intonation or facial mimicry, during interpersonal interactions, under the flagship of "social physics" per what he frequently refers to as Buchanan's 2007 coining of the term: [5]

“Beyond organizational engineering is the possibility of building physicslike models of human behavior, coined ‘social physics’ by Mark Buchanan. A social physics would allow us to discover fundamental laws that govern all human organizations. If human behavior were largely governed by logical argument and conscious decision, we could not build such models because there would be no fixed laws beyond those that stem directly from the definition of rationality. The sociometer data, however, reveal a different side of humanity—one in which humans react to each other in a regular predictable manner.”

2007 book The Social Atom in which he conceives of a human particle view of individual people, calling us "social atoms" speculating on how thermodynamics and physics apply to the mass behaviors of social systems of what he calls “social atoms” or people. [2] The following is an excerpt:

“We should think of people as if they were atoms or molecules … following simple rules and try to learn patterns to which those rules lead.”

Buchanan’s lecture at Microsoft on the social atom was voted as one of the top videos of 2007 by New Scientist magazine. [3]

Difficulties on theory
Two obvious issues with Buchanan's presentation are firstly ambivalence as to whether or not humans are atoms or molecules (human molecules) and second his view that human social atoms have free will within the laws of thermodynamics due to chaos.

Education
Buchanan completed his PhD in 1993 in physics, and did research for several years in the areas of nonlinear dynamics ("chaos theory" in the popular lingo), Hamiltonian systems theory, and plasma physics. The then worked as an editor with the international science journal Nature. Buchanan later worked for the British (but increasingly international) popular science magazine New Scientist. After that experience, he became a freelance writer and has since written three books and about 100 odd articles in publications ranging from Nature and Science to the Harvard Business Review. In recent years, he has been contributing a monthly column to Nature Physics.