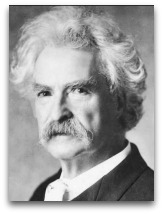 Quotes | By
The following are noted quotes by Twain:

“How insignificant we are, with our pigmy little world! Was our small globe the favored one of all? Does one apple in a vast orchard think as much of itself as we do? ... Do the pismires argue upon vexed questions of pismire theology—and do they climb a molehill and look abroad over the grand universe of an acre of ground and say: 'great is god, who created all things for us?”

“Never argue with stupid people, they will drag you down to their level and then beat you with experience.”

“There is no other life; life itself is only a vision and a dream for nothing exists but space and you. If there was an all-powerful god, he would have made all good, and no bad.”

“The Bible has noble poetry, some good morals, a wealth of obscenity, and upwards of a thousand lies.”

“The Bible is a mass of fables and traditions, mere mythology.”

“Never let school get in the way of your education.”

“You believe in a book that has talking animals, wizards, demons, sticks turning into snakes, burning bushes, food falling from the sky, people walking on water, and all sorts of magical absurd and primitive stories, and you say that we ae the ones that need help.”

“One of the proofs of the immortality of the soul is that myriads have believed it. They also believed the world was flat.”